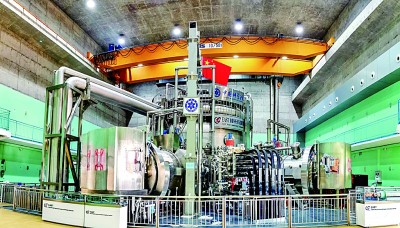 This paper, Hefei, May 28 (Reporters Chang He and Ding Yiming) In the early morning of May 28, a good news came from the control hall of the all-superconducting Tokamak nuclear fusion experimental device, Hefei Institute of Material Science, Chinese Academy of Sciences. , The 16th round of EAST device physics experiment under way has achieved repeatable 120 million degrees 101 seconds plasma operation and 160 million degrees 20 seconds plasma operation, once again setting a new world record for the operation of the Tokamak experimental device.

EAST, also known as the "artificial sun", is a major national scientific and technological infrastructure approved by the National Development and Reform Commission during the "Ninth Five-Year Plan" period. In June last year, the Plasma Institute of the Hefei Research Institute of the Chinese Academy of Sciences launched the upgrade and transformation of the EAST device. The upgrade and transformation that lasted for a year has comprehensively improved the performance of the device, and overcome the steady-state high-power heating and completely non-inductive high-speed in the physical experiment. A series of technical problems such as current drive, high-precision plasma real-time control, high thermal load plasma and wall material interaction. The realization of 120 million degrees plasma operation in 101 seconds increased the world record of 100 million degrees and 20 seconds achieved in the physical experiment of the EAST device last year by 5 times, indicating that the comprehensive research capabilities of the EAST device have achieved a major breakthrough, marking my country’s steady-state high parameters The field of magnetic confinement fusion research leads the international frontier.

Continuous steady-state operation under high-temperature plasma conditions of hundreds of millions of degrees is a necessary condition for future fusion power generation. At present, the EAST device is the only magnetic confinement nuclear fusion experimental device in the world that has a heating method and a divertor structure similar to ITER. It is the only one that can fully demonstrate and verify the International Thermonuclear Fusion Experimental Reactor ITER in the next 400 seconds under conditions of the order of hundreds of seconds. Experimental device for scientific research. The series of innovative research results and technological accumulation on the EAST device also provide a solid scientific and technological foundation for my country's independent construction of fusion engineering experimental reactors.

Nuclear fusion energy has outstanding advantages such as rich resources, no carbon emissions, clean and safe, and is one of the ideal clean energy sources for mankind in the future, and can make important contributions to achieving carbon neutrality. The two major difficulties in realizing nuclear fusion power generation are how to realize the ignition of hundreds of millions of degrees and the stable and long-term confinement control of plasma, and it is particularly difficult to achieve long-term maintenance of plasmas of hundreds of millions of degrees. This requires plasmas of hundreds of millions of degrees and minus 269 degrees Celsius. The interaction of magnets, plasma with high thermal load, and wall materials is highly integrated and organically combined under a number of extreme conditions such as dynamic precision control, which is very difficult and challenging. Previously, the longest duration of plasma operation of more than 100 million degrees in the world For 20 seconds.

The results of this physical experiment are the key to a series of future fusion reactors such as the EAST device's first international use of all-metal active water-cooled first wall, high-performance tungsten divertor, steady-state high-power wave heating, and precise control of plasma configuration. Technical verification. These key technologies are the core technologies of fusion engineering that my country's fusion scientists and engineers have independently developed and mastered with the strong support of the state in recent years.