--> The aunt dropped stool from the 10th floor and was detained after fighting with neighbors. Aunt: I am a legitimate defense | AboutMicro News
'https://svgshare.com/s/YY2' >

The aunt dropped stool from the 10th floor and was detained after fighting with neighbors. Aunt: I am a legitimate defense

The aunt dropped stool from the 10th floor and was detained after fighting with neighbors. Aunt: I am a legitimate defense

On August 1, 2019, Ms. Han, who lives in a district in Dalian, found stool on the balcony. Checking the surveillance video, it was found that Ms. Zou on the 10th floor left it at her house.

An angry Ms. Han took her daughter-in-law and the entourage to find Ms. Zou's theory. Ms. Han and Ms. Zou were both injured during the fight, and several of them were administratively punished.

Ms. Zou, who was fined for 5 days in administrative detention, filed an administrative lawsuit and requested that the administrative penalty decision be revoked. Ms. Zou believes that she counterattacked after being beaten, which is a legitimate defense.

Recently, the administrative judgment of the second instance of the Dalian Intermediate People's Court was published on the Chinese Judgment Documents website, and Ms. Zou's petition was rejected. 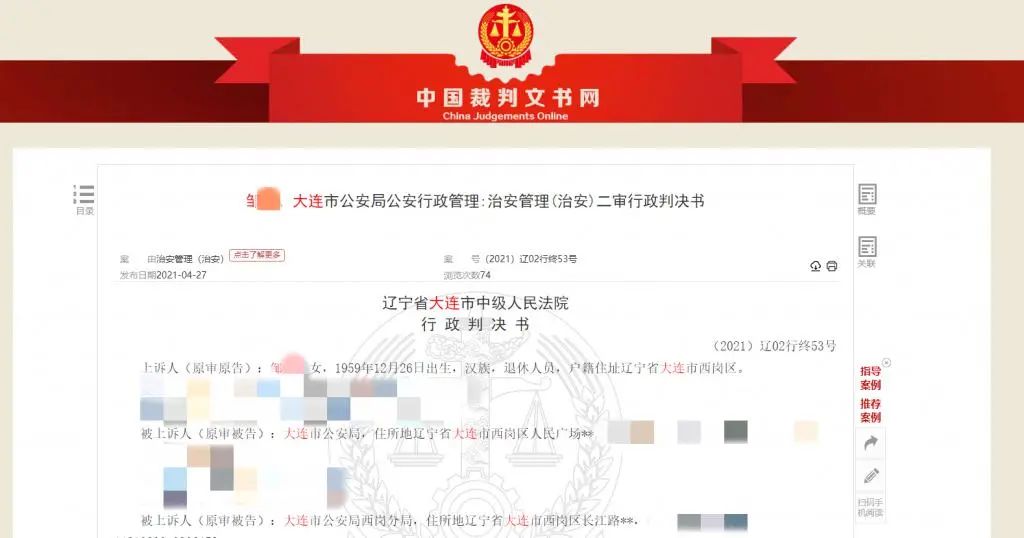 Fighting after being thrown stool by a neighbor

Ms. Han lives with her daughter and son-in-law on the 3rd floor of a district in Dalian. On August 21, 2019, Ms. Han found that the balcony in front of the middle window made people throw feces and other garbage. After checking the surveillance video, it showed that it was thrown from Ms. Zou's house on the 10th floor.

At about 17:50, Ms. Han, her son-in-law and daughter, together with their children, found Ms. Zou who was watching the card game downstairs, and fought with each other. During the fight between the two sides, Ms. Zou picked up the wooden stick that pressed the playing cards and hit Ms. Han's head and face, and Ms. Han scratched Ms. Zou's face and hair. The fighting between the two sides caused Ms. Zou and Ms. Han to be injured.

After receiving the report, the Xigang Public Security Bureau accepted the case on August 27, 2019, conducted investigations and evidence collection, processed the examination and approval of the extension of the time limit for handling the case, and prepared punishment notification transcripts for Ms. Zou and Ms. Han. In 2019, On September 30, the "Administrative Punishment Decisions" were made and served to the parties.

The People’s Court of Lushunkou District of Dalian City held that the evidence provided by the defendant’s Xigang Public Security Bureau’s transcripts of inquiries by the parties and other witnesses, surveillance video recordings, and hospital medical certificates, etc., can prove that the dispute was caused by the plaintiff’s Ms. Zou’s application to Ms. Han’s home. It was caused by dumping garbage and feces on the balcony in front of the window, and Ms. Han did not properly handle the conflict, which led to a fight between the two parties. During the fight between the two parties, Ms. Zou hit Ms. Han’s head and face with wooden sticks, causing Ms. Han’s injury and infringing on the right to health of others, and should be given administrative punishment for public security management in accordance with the law.

The court of first instance held that the Xigang Public Security Bureau gave Ms. Zou an administrative penalty of five days of detention and a fine of 200 yuan. The application of the law was correct and the amount of penalty was appropriate. The administrative reconsideration decision of the Dalian Municipal Public Security Bureau clearly identified the facts, applied the law correctly, and the procedures were legal. The first instance dismissed the plaintiff’s claims.

Ms. Zou refused to accept the appeal and filed an appeal. She believes that surveillance video evidence cannot directly prove that the garbage was thrown by the appellant. "The surveillance video does not display the date or time. Even if the video shows that the garbage is thrown from my house, it cannot directly prove that it must be my work. I am not living alone."

Ms. Zou believes that her counterattack is a legitimate defense. "I am an old woman who is nearly 60 years old. When I was suddenly attacked and faced with a brutal attack that is stronger than myself, I shouldn't be forced to not hurt the other party while defending."

The valid evidence in the case shows that Ms. Zou’s assault on others is inconsistent with the aforementioned interpretation of the Public Security Administration Punishment Law. The case of the Xigang Branch of the Dalian Public Security Bureau involved public security penalties and the amount of penalties was appropriate. The second instance rejected the appeal and upheld the original judgment.