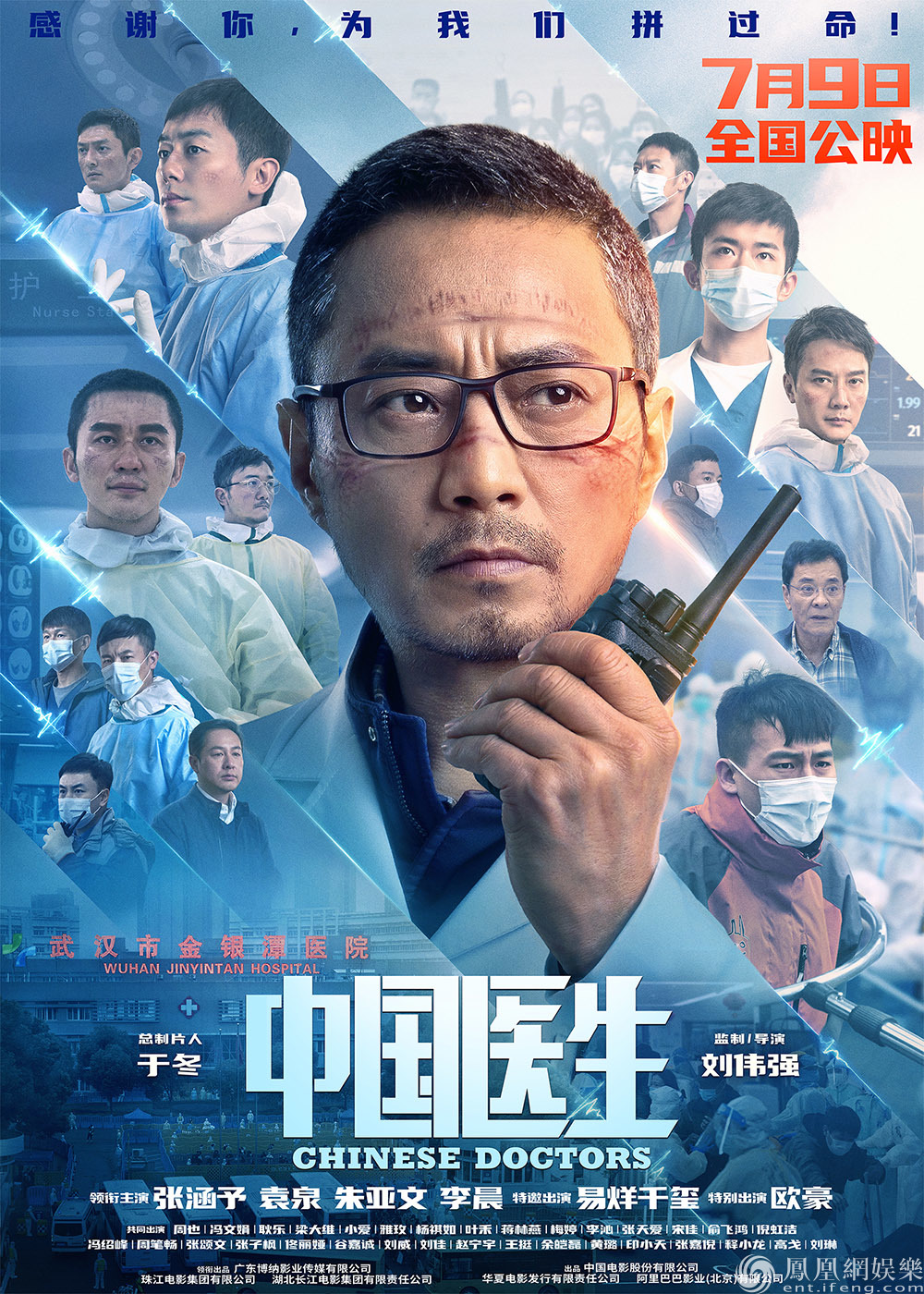 "Thank you for working hard for us!" The anti-epidemic movie "Chinese Doctor" directed by Liu Weiqiang and co-produced by Liu Weiqiang and Li Jinwen, today released the finalized poster and the finalized preview, and officially announced that it will be released nationwide on July 9. ! On the poster, Zhang Hanyu and Yuan Quan, who had led the team to turn the tide in the movie "Captain of China", gathered again this time, leading them to become Chinese medical workers who are on the front line of fighting the epidemic and forget their lives. In addition to Zhang Hanyu and Yuan Quan, Zhu Yawen, Li Chen, Yi Yanqianxi, Ou Hao and other roles also took turns in the battle, with superb acting skills and full of awe, to get close to the truth with all their strength and pay tribute to the benevolence of the doctors together!

The movie "Chinese Doctor" is adapted from the real events of the fight against the new crown pneumonia epidemic, with Wuhan Jinyintan Hospital as the core story background, while taking into account Wuhan Tongji Hospital, Wuhan Pulmonary Hospital, Wuhan Union Hospital, Wuhan University People's Hospital (Hubei Province) People's Hospital), Huoshenshan Hospital, Fangfang Cabin Hospital and other fraternal units, based on Wuhan medical staff, and the medical teams from all provinces and cities across the country as their character prototypes, recorded the magnificent and arduous struggle against the epidemic in a panoramic manner!

When the new crown pneumonia epidemic came suddenly, if Wuhan was the "epidemic center" at that time, then the center of the center was Wuhan Jinyintan Hospital. This specialized hospital for infectious diseases, which the old Wuhan people may not be familiar with, became the first place where China's fight against the epidemic started. During the epidemic, in order to control the spread of the virus, Jinyintan Hospital transformed its office into an ICU, collected all the new crown patients, and undertook the treatment of a large number of critically ill and critically ill patients. The entire hospital withstood the pressure and overload operation and bought time for the arrival of the Hubei medical team. During the most severe period of the epidemic, Jinyintan Hospital made the decision to urgently arrange the evacuated ward to admit patients with new crown, which fully reflects the responsibility of the doctors and the responsibility of China.

Yu Dong, chief producer of the movie "Chinese Doctor" and chairman of Bona Pictures Group, revealed that the first idea to shoot the film "Chinese Doctor" began with a photo of Zhong Nanshan riding a train to Wuhan to fight the epidemic. . "The scene where the medical teams from different regions set off and the Wuhan doctors were fighting on the front line made us particularly impulsive to create. During the Spring Festival, I discussed with Director Liu Weiqiang, so I asked the Propaganda Department of the Guangdong Provincial Party Committee and the National Film Administration to take the initiative to create this theme. "For this reason, Bona Film Group re-convened the original crew of the movie "Captain of China" and led the creative team into Wuhan to visit the hospital as soon as Wuhan lifted the control measures for the Lihan Lihu channel in April 2020. gather information. When visiting Wuhan Jinyintan Hospital, everyone was touched by the stories that happened here, and finally decided to focus on the “eye of the epidemic” of Wuhan Jinyintan Hospital, and create with a small view of the big picture, bringing a magnificent fight against The epidemic picture scroll slowly unfolded.

The "Chinese Doctor" finalized preview, which was exposed today, explained to the audience what is the role of the doctor and the role of the Chinese with rich and true details. In the preview, the medical staff played by Zhang Hanyu, Yuan Quan, Zhu Yawen, Li Chen, Yi Yang Qianxi, etc. face the ensuing challenges and race against the clock to "grab people" from the sick; emergency scenes such as cardiopulmonary resuscitation and tracheal intubation, Ling Guan I can't help thinking that "the mission and responsibility of the doctors is to help the people in danger and to charge forward." On the simultaneously exposed fixed-file posters, a group of anti-epidemic portraits suddenly appeared in front of them: medical staff in protective clothing, resolute ordinary people... all portrayed the emergency atmosphere and the state of the world during the epidemic.

Zhang Hanyu figured out the role to pay tribute to the benevolence of doctors, "convergent performance" interprets the people's hero

In the film, Dean Zhang Jingyu, played by Zhang Hanyu, unites the cadres and staff of the hospital, and brings confidence and hope to patients with the medical staff in Hubei. This role is based on Zhang Dingyu, the winner of the national honorary title of "Hero of the People", deputy director of the Health Commission of Hubei Province, and former president of Jinyintan Hospital. In a frontal fight against the new crown virus, Zhang Dingyu, the head of a hospital, dragged the patient suffering from "gradual cold syndrome", silently bearing the huge blow of his wife also contracting new crown pneumonia, and insisted on fighting in the first place in the fight against the epidemic. On the front line, he eventually led the hospital's cadres and employees to treat more than 2,800 patients, and made a major contribution to winning the defense war in Hubei and Wuhan.

Zhang Hanyu said that Zhang Dingyu's courage and responsibility as a grassroots dean and ordinary party member was shocking. In order to play this role well, he went to Wuhan to spend a few days with Zhang Dingyu before the filming started. "During that time, I went to rounds with him every day to experience the work of a doctor. His distinct personality of love and hatred left a deep impression on me. Impression, I also incorporated my observations of him into my performance. To play this role well, it’s not enough to make my whole person look like him. I have to use my own state, demeanor, language, The subtle details such as the style of work make the audience feel like it.” For this, Zhang Hanyu can be said to have done enough homework. In addition to interpreting the role in Hubei dialect throughout the entire process, Zhang Hanyu is in consideration of Zhang Dingyu’s physical condition with gradual freezing. Particular attention was paid to the details of body posture during the performance. Chief producer Yu Dong summed up Zhang Hanyu’s performance style as “convergent performance”: “He didn’t emphasize and amplify too much, but hid the performance by himself, but kept it in front of others. It was the same as Dean Zhang Dingyu himself at the time. Consistent, in this way the image of the entire dean is shaped."

Yuan Quan plays Wen Ting, the director of the Department of Critical Care Medicine in the movie "Chinese Doctor". She contributed to the "disfigured performance" in order to truly restore the state of the medical staff under the anti-epidemic work: the cheek was strangled by the mask, and she was wearing protection for a long time Wearing clothes, goggles and masks, the skin was soaked in sweat and turned white, every time I appeared, my face was tired, only the eyes still showed the firmness and bravery of the doctor...

In order to shoot a major scene, Yuan Quan once wore protective clothing for 8 hours, but she said afterwards that she hadn’t calculated the time in particular. At that time, she just wanted to get closer to the reality with all her strength. “Once you put on the clothes, you enter that state. You won’t pay special attention to the time.” Yuan Quan said that in order to play this role well, in addition to constantly practicing technical operations such as wearing protective clothing, learning medical knowledge, but also often asking medical workers who have experienced the frontline of the epidemic for psychological experience. "More important than learning technical operations is to find the psychological support of the character." She also modestly said: "After filming the "Chinese Doctor" scene, I absolutely dare not say what I have mastered. I just tried to learn and try my best. Get close to them. It is not so easy to become a qualified medical worker, they are really great, pay tribute to them!"