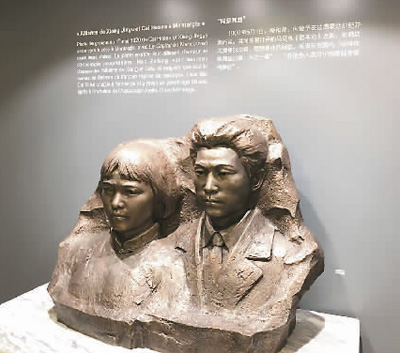 The statue of "Xiang Cai Tongmeng" in the Mondalji Memorial Hall of China's Work-study Program in France. 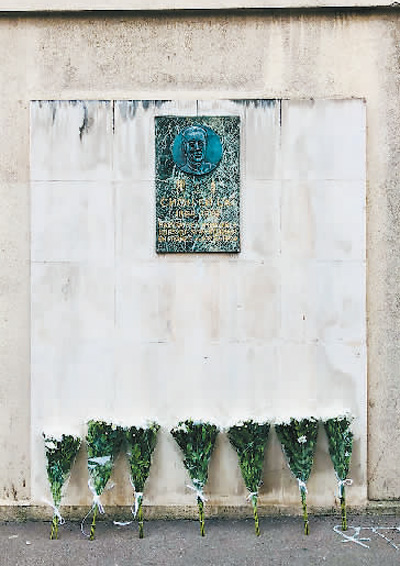 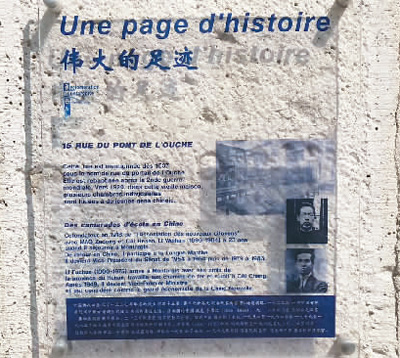 The "Great Footprints" exhibition board on the outer wall of the Mondalji Memorial Hall of China's Work-Study in France. 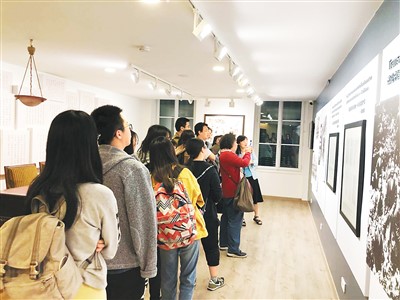 From 1919 to 1920, a group of Chinese young people went to France to work-study programs in order to explore the way to save the country. They set off from Shanghai and arrived at the port of Marseille in France after more than two months, and then travelled to various parts of France by train. Among them, a team of more than 300 people chose to go to a small town about 100 kilometers away from Paris, "Mondalji" for work-study programs. Hundreds of people including Deng Xiaoping, Cai Hesen, Chen Yi, Li Fuchun, and Cai Chang studied here.

This year, we ushered in the 100th anniversary of the Chinese Communist Party. Many Chinese students studying in France spontaneously came to this small city with a rich red culture to relive that period of history.

As soon as I got off the train, I saw the square in front of the Mondalji Railway Station. This square was named Deng Xiaoping Square in 2014 to commemorate the 110th anniversary of Deng Xiaoping’s birth and the 50th anniversary of the establishment of diplomatic relations between China and France. Towering in the center of the square is a sculpture called "Hundred Years Monument", which vividly portrays the heroic figure of Chinese people of insight and aspiring young people studying in France and exploring the road to saving the country and the people, condensing an important history of Sino-French exchanges and witnessing It is the hard work and hard work of the older generation of leaders of the Chinese Communist Party to work, study, and explore the revolutionary road in this city.

Crossing a stone bridge and walking for about 10 minutes, an ancient building is impressively written in Chinese characters "Mondalji Memorial Hall of Chinese Travel in France, Work-study Program". This is a small three-story building, and it is the former seniors who studied in France. A place to study and discuss Marxism. Being in it, we can still feel the atmosphere and scene of their translation of Marxist books and discussing communism theory when they were here. A feeling and ideals instantly rushed to our hearts.

I'm thinking that 100 years later, we Chinese students will go to France to study, which opens a window for a deeper understanding of the world and China. The same is the destination, the difference is that the motherland behind us has already undergone earth-shaking changes.

Walking out of the memorial hall, we are still immersed in the warm, uplifting and positive atmosphere, as if we have traveled through time and returned to the past.

Before we knew it, we reached the end of the bluestone road, entered a secluded French garden-Duji Park, bypassed the trickle in the bamboo forest, and saw a striking sign with the words "Great Footprints" written on it. The site of the Dani Conference".

The Montani Conference is an important historical coordinate. It was at this conference that students studying in France, mainly Cai Hesen and Xiang Jingyu, put forward the idea of ​​establishing the Communist Party of China. Later, in his letter to Mao Zedong, Cai Hesen systematically expounded the basic theories of Marxism and Lenin's party-building doctrine with passion. Mao Zedong replied: "This letter of yours is very pertinent, and I don't have a word of disapproval", and told Cai Hesen that preparations for the party organization are already underway in China.

Today, through these inspiring words, one can still feel the great enthusiasm of the revolutionary ancestors. We can't help sighing how many young people with aspirations to serve the country gathered in this small city a hundred years ago. Their youth shines here, from hesitation to awakening to exploration, to moving forward with determination, and finally becoming a firm communist. Mondalji, this legendary city has witnessed all this.

Along the prosperous main road, we came to the city center. A magnificent classical building is where Mondalji’s city hall is located. Here is also a sign of "Great Footprint", which reads: "Old Boy's School Site" .

A hundred years ago, the older generation of pioneers studying in France studied here. At that time, France had just experienced the First World War, the economic depression, the labor force was greatly reduced, and the public school staff included many demobilized and disabled soldiers. Obviously, the magnificent school building is in sharp contrast with the bleak school scene. Everything here is telling the impact of war and peace on a country and a nation. I think these scenes and scenes here must have left a deep impression on the pioneers of the revolution and gave them a deep understanding of the real situation in Europe.

Unlike today’s international students, the older generation of students studying in law needs to earn tuition and living expenses on their own. The Hutchinson Rubber Factory in Mondalji has witnessed this period of history. From 1920 to 1927, there were hundreds of Chinese students working here, including Deng Xiaoping.

Deng Xiaoping worked as a handyman in the shoe workshop here for several months. At that time, Deng Xiaoping was registered in the factory under the name of Deng Xixian. Today, Deng Xixian's work card is replicated on the monument in front of the factory.

The work-study life is very difficult. Young students work 6 days a week, 9 hours a day, but their wages are very meager. The factory owner treats the students very harshly. In addition to prolonging working hours at will, they will fabricate various reasons to deduct their wages. In the evening, the student workers who had been exhausted all day were crowded in a wooden shed specially built for them, and dozens of people crowded one place.

However, despite the difficult work and living environment, Deng Xiaoping has always maintained an optimistic mood. Every day after get off work, the workshop is very lively, everyone chats and jokes. Perhaps, this revolutionary optimism maintained in a difficult environment has also created the perseverance of revolutionary pioneers.

In the spring of 1921, Zhou Enlai arrived in Paris and participated in the formation of the French communist group. In June of the following year, Zhou Enlai convened another 18 progressive youths, including Zhao Shiyan, in the Boulogne Forest in the western suburbs of Paris to form a meeting to form the Chinese Youth Communist Party in Europe. The party headquarters is located in the "Neptune Hotel" near Place Italia in the 13th arrondissement of Paris. From 1922 to 1924, Zhou Enlai worked and studied here during the day, carried out party and group activities at night, and created the revolutionary publication "Red Light" (formerly known as "Youth") to promote Marxist ideas.

All the students who have visited here know that Zhou Enlai's working environment at the time was very difficult. The room was only seven or eight square meters. Apart from a bed and a desk, there was almost no space left. But this house is unusual. Deng Xiaoping, Nie Rongzhen, Chen Yi, Li Fuchun and others have all left their footprints here. To commemorate this period of history, a bronze sculpture of Zhou Enlai is specially inlaid on the exterior wall of the hotel to commemorate their prosperous years in France.

Today, whenever there is an important festival, many overseas Chinese, Chinese students studying in France and even local residents come to this hotel and put flowers in front of the sculpture as a memorial. My classmates and I often come here, Zhou Enlai and other proletarian revolutionaries of the older generation's talents and accomplishments have inspired us to move forward today.

As students studying in France in the new era, we stand at the intersection of history and reality with a lot of emotion. Thinking back to China at that time, the mountains and rivers were broken and devastated, countless people with lofty ideals traveled all over the world to find a way to help the world and save the country. It is precisely because of generations of revolutionary ancestors who have succeeded in succeeding generations of revolutionary ancestors that the prosperity of our country and national rejuvenation has been achieved today. History has proved that the Chinese Communist Party led the Chinese people to create miracles and opened a new page in the history of the development of Chinese civilization.

Today, we are studying in France, following the footsteps of the early scholars studying in law. Listen carefully, that period of history seems to be still calling in the wind. This belief and this spirit inspire and inspire all overseas students!

(Ding Jianwen/picture, the author is the chairman of the All-France Chinese Scholars and Students Association, and a PhD candidate in Marxist philosophy at the University of Paris 8)