According to the news released by the Meteorological Department, at 8 o'clock on July 19, the tropical depression in the South China Sea has intensified into the No. 7 typhoon "Chapaca" this year. Its center is located on the sea about 160 kilometers southeast of Yangjiang City, Guangdong Province. The largest near the center is Wind force is 8 levels. 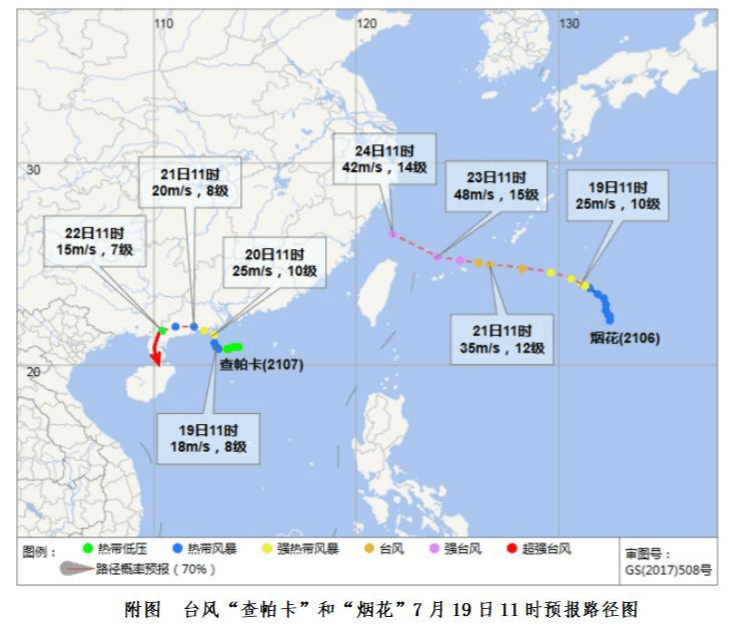 It is expected that "Chapaca" will make landfall in the coastal areas of western Guangdong from the night of the 20th to the early morning of the 21st, and then move slowly to the south west; it may bring a strong wind and rain to the land and offshore of Hainan Province from the 23rd to the 24th.

In addition, the center of this year’s No. 6 typhoon "Fireworks" at 8 o'clock on the 19th is located on the Northwest Pacific Ocean about 970 kilometers east of Yilan County, Taiwan Province. The maximum wind force near the center is 10. It is expected that the "fireworks" will operate at 5 per hour. The speed of ~10 kilometers moves to the northwest, and the intensity gradually strengthens, and the strongest can reach 13~15 (typhoon level or strong typhoon level); it moved into the East China Sea at night on the 21st, and then gradually approached the coast of Fujian and Zhejiang.

The notice requires the relevant prefectures and cities in Guangdong to properly settle the victims, report the disaster information quickly and accurately, and carry out disaster relief in a timely and effective manner; all localities must immediately organize the retreat of fishing boats, and before 18:00 on July 19, from the west of Zhuhai to the sea east of Leizhou Peninsula All fishing boats for sailing operations return to the port for shelter from the wind, and the fishermen who raise rafts go ashore to avoid danger; fishing boats in other areas should also withdraw to the shore and make preparations to return to the port for shelter in a timely manner.

At 10:50 on July 19, the Hainan Meteorological Bureau issued a four-level typhoon warning.

The Meteorological Department of Hainan Province reminded that due to the interaction of Typhoon "Fireworks", there is greater uncertainty in the later path of Typhoon "Chapaca". From 22 to 24, tropical depression may linger in the northeastern part of the South China Sea, and the impact of wind and rain on Hainan Province will continue. Relevant departments are requested to pay close attention to follow-up forecasts and do a good job of defense.

This year's No. 6 typhoon "Fireworks" is approaching the coast of Fujian and Zhejiang. According to the dynamics and development trend of the typhoon, the Ningbo Maritime Safety Administration has decided that the coast of Ningbo will enter the fourth-level typhoon defense from 11:30 today (19th).