Connected with Internet celebrities in three cities, 15 foreign media reporters from 9 countries "see the real Xinjiang from the cloud"

Connected with Internet celebrities in three cities, 15 foreign media reporters from 9 countries "see the real Xinjiang from the cloud"

At 3 pm on May 28th, Beijing time, a “cloud” live broadcast room was set up on time. In the following two hours, three Xinjiang Internet celebrities showed their lives to 15 foreign media reporters from 9 countries. Daily, Xinjiang characteristic culture.

The real-time transmission of the Internet live broadcast and the grassroots field display of the Internet celebrities have become the biggest features of this cloud communication. Soon after the live broadcast began, several colleagues of the Pakistani journalist gathered around the cameras that were watching; in order not to miss this wonderful exchange meeting, the female reporter of the Kyrgyz National "Kabar" News Agency even watched with her child in her arms.

The message area is particularly lively: some reporters have captured the details of the wood carving patterns of the Internet celebrity homestays and generated cultural identity. Some people were immersed in the Xinjiang cuisine "eat and broadcast" and called "I am drooling"; some "salute", some expressed blessings, some praised" Minority women have their own careers", some people offered suggestions for reporting on Xinjiang. Foreign media reporters’ curiosity and attention to Xinjiang can be seen, and the facts that are often distorted by Western foreign media are revealed when foreign media communicate with Internet celebrities.

Following the live broadcast, the foreign media friends in the live room "knocked open" the "Gu Li's Home" in the old city of Kashgar: In a typical Uyghur-style traditional residential courtyard, you can see wooden handrails with exquisite patterns everywhere, and the tables are neatly arranged. The various dried fruits on display, the brightly-colored Aedles silk...The music sounded, and the girls in national costumes danced happily, and the tourists who sat down and admired the shaking their heads accidentally "stumbled into" the live broadcast room. Although foreign media reporters were far away in the "cloud" in the live broadcast room, judging from the joy on their faces, the lively and festive atmosphere penetrated the other end of the screen without any reduction. 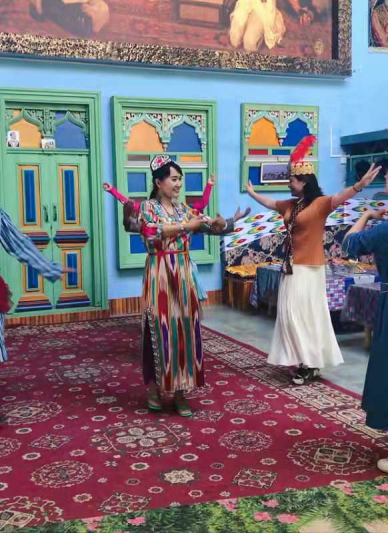 What is even more proud of Salamatigul Kari is that "Kashgar people live in the 5A scenic spot of the ancient city. This is different from other ancient cities and is unique."

Hotan Internet celebrity Ayituna Ablikmu started "Eat and Broadcast" as soon as he came up. She broke apart a Hotan roasted bun and stuffed it into her mouth, enthusiastically introducing the food culture of Hotan to foreign media. When talking about roasted naan with rose stuffing, the ridicule of "We Hetian roses are not for sending girls, but for eating" made foreign media reporters laugh. Ayituna Abrikmu chose to become an “Internet celebrity” a few years after graduating from university. With the natural familiarity of the “Internet aborigines” with the Internet, and the enthusiasm for sharing the customs of his hometown, he stepped on it In recent years, the Internet celebrity live broadcast economy has been the trend. She now has more than 1.4 million fans on the entire network. Using the live broadcast, she has opened a huge window to show the ethnic customs and people’s lives in Xinjiang. Gourmet specialty products are sold at home and abroad, driving the economic development of the hometown.

Speaking of the development and changes in Xinjiang, the young Ayituna Ablikmu told everyone, “When I was a child, I had to take a donkey cart or a bus to go from Hotan to Urumqi. Now, there are asphalt roads in front of my house, and many people’s doorways are placed in front of them. Driving a car."

Right now, the Internet celebrity economy is allowing more characteristic products in Xinjiang to "overtake on a curve" and enter the large inland market to the world. Ayituna Abrikmu is the beneficiary of this emerging economic wave. She tells everyone that her monthly income through online celebrity live broadcasts is still considerable.

Tacheng Internet celebrity Zaituna Karimwa is affectionately called "Yang Po" on the Internet. This Tatar national-level intangible cultural heritage inheritor comes from a typical Xinjiang multi-ethnic family. In the one-hundred-year-old "Imanshu Manor" where six generations of her family lived, foreign media reporters "visited" the marriage bed, sewing machine, old photos and other five generations of old objects, and saw a The family's previous efforts and the progress of the times. As soon as the camera turned, "Wang Po" took the foreign media reporter into the courtyard of the old house. The scene of harmonious coexistence of Xinjiang's diverse cultures is here.

Making nearly a hundred different types of pastries is a well-known skill of "Yang Po". In a corner of the yard, the Han and Tatar friends of the "foreign mother-in-law" are learning to make cakes together. Under the pavilion in another part of the yard, friends from Daur and Tatar ethnic groups, accompanied by the accordion, used their own folk songs to welcome foreign media reporters far away in the "cloud".

This is not a traditional, serious, and serious seminar. On the contrary, the presentations and exchanges in the live broadcast room appear natural, frank, and equal. But at the same time, the real lives of the three female Internet celebrities under the lens all respond to the hot concerns of foreign media reporters in Xinjiang. Soon after the live broadcast began, the "magic power" was shown-a Pakistani reporter's window showed that several colleagues surrounded the viewing camera one after another; in order not to miss this wonderful exchange meeting, the Kyrgyz National "Kabar" News Agency The female reporter even watched with her baby in her arms.

It is not difficult to see in the message area that the live broadcast content is naturally true but rich. Perhaps it is the biggest consensus among foreign media reporters on "seeing Xinjiang in the cloud". Chand Manish, Editor-in-Chief and Chief Executive Officer of Writing India, said in a message, “I have a very comprehensive understanding of the situation in Xinjiang, and this exchange is very meaningful!” Ritu Raja of Nepal’s “New Nepal” The most impressive thing about Subidi watch is the neat and artistic decoration in "Gulistan's Home". He believes that "this scene truly reflects the happiness and prosperous life of the people". 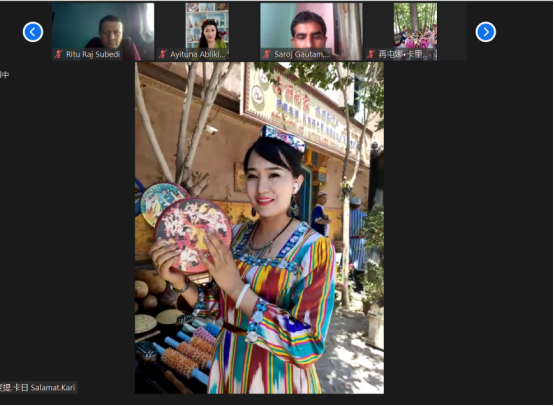 Seeing that the three women who are "Internet celebrity live broadcasts" have their own independent careers, the editor of Radio Nepal, Kasal Gimir, praised, "It is great to see ethnic minority women have their own careers!"

The visual three-dimensional display that is vivid and colorful, singing and dancing is not enough. The foreign media of "Cloud View Xinjiang" also had face-to-face and equal exchanges with Internet celebrities.

Nurzan Kasmariyeva of Kyrgyzstan’s "Kabar" news agency expressed concern about China’s support policy measures for ethnic minorities in Xinjiang. Zaituna Karimowa used her son as an example to introduce, “When he was in high school and college, his son can enjoy free education, and he can also get financial support after graduation.” And Zaituna Karimowa does his own work. Intangible cultural heritage inheritors also enjoy many supports such as state subsidies and free training.

Against the background that the global epidemic situation is still severe, all countries are still facing the challenge of restarting economic recovery after the epidemic. Armenian independent media person Paruil Sinavsky asked about the development of Xinjiang during and after the epidemic. Salamatiguri Kari told him that the local government provided support policies such as interest-free loans to merchants in the ancient city. With the improvement of the epidemic, business in the store was as hot as ever in early March.

For a long time, no matter the content topic or the reporting angle, some western media have tended to be out of balance and inaccurate in reporting on Xinjiang. What is Xinjiang like? These Internet celebrities from ordinary local people have the most say.

Taking the historical non-objective reports of the destruction of mosques in Xinjiang and the persecution of Muslims in the Western media as an example, Kashgar internet celebrity Salamatigul Kari said to foreign media reporters, “including my family and relatives, they can freely believe in themselves. Religious religion. The largest local Aitigar Mosque is located next to the ancient city. As long as it is time for worship, religious people can go by themselves and are also open to tourists." The host of the exchange meeting and senior media person Wen Xian provided one during the live broadcast. The set of data is thought-provoking: In the 1980s, the United States and the United Kingdom had 2,000 and 1,550 mosques respectively, and this data can reach 24,400 in Xinjiang, China.

Western media's prejudices and concocted lies against Xinjiang cannot stop Xinjiang's vigorous transformation and development. "Foreign mother-in-law" told reporters, "You don't have to deliberately refute it. It is enough to use our own experience and actual situation of our ethnic minorities to explain the problem. What the United States says is all nonsense!"

How to get rid of the reporting bias? "The best way to understand and understand an international hot spot should be to know, judge, and report the first time, instead of letting the knowledge of others occupy your brain." Wen Xian, the host of the exchange meeting and a senior media person, also went abroad. The media put forward a suggestion, "As for how to truly understand Xinjiang, you can refer to the white papers published by the State Information Office in recent years to introduce the situation in Xinjiang with a lot of facts and multiple aspects.

Towards the "cloud", an innovative experiment to show the real Xinjiang

Although it is impossible to visit Xinjiang because of the epidemic, the convenience and gains of communication provided by the "cloud" also made foreign media feel impressed.

Abel Hussein, editor of Pakistan's "Pakistan Today" newspaper, said that the daily lives of Xinjiang people are often distorted by Western media. He gave his own suggestions, “The people of Xinjiang should share videos of daily life, surrounding environment, food culture, folk rituals, etc., like Ayituna Ablikmu .” He also said that many Pakistanis Can use social platforms such as WeChat, hoping to have the opportunity to get access to real Xinjiang information and get rid of the misreporting of Xinjiang by Western media.

Hotan internet celebrity Ayituna Abrikmu said that I also hope that more faces of Xinjiang will appear on more platforms to show the world the beautiful life in Xinjiang. For Kashgar internet celebrity Shala Matiguli Kari, since there has never been a chance to communicate with so many foreign media reporters for a long time, it is inevitable to be a little excited and nervous. But she said that if the epidemic is over, all foreign media reporters should come and see for themselves.

The Internet communication environment continues to move towards openness and freedom, allowing ordinary people and Internet celebrities such as Salamatiguri Kari, Zaituna Karimwa, Ayituna Ablikmu, etc. to use online platforms to actively speak out , To give full play to the grassroots and non-authoritative nature of Internet communication will help break the situation of self-talking by Western media and ensure that real voices from Xinjiang are not absent. 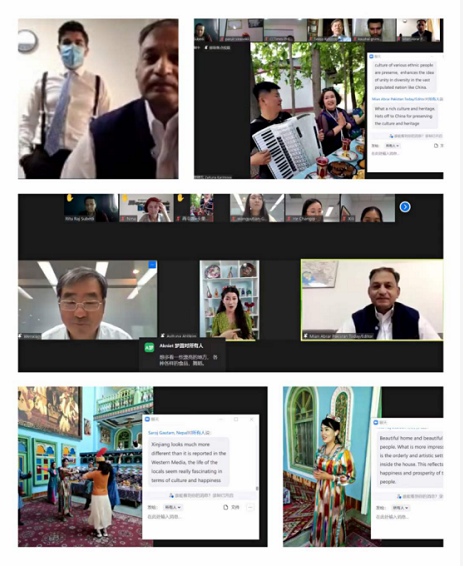 In Wen Xian’s view, “The three internet celebrities from Kashgar, Tacheng, and Hotan demonstrated in the most down-to-earth and most sincere and hospitable way a real Xinjiang where diverse cultures coexist in harmony and strive for progress. They are full of smiles. It is a powerful response to those false lies about Xinjiang."

He commented that this cloud exchange event was a successful innovation, which broadened the channels for using modern communication methods to introduce Xinjiang to the outside world in a true, objective and accurate manner. Source : World Wide Web / Li Rong, Wang Huan, Zhang Shan and Liang Xili