Barbecue in the common area. [Global Times Special Correspondent Ru Yue] The third wave of the epidemic in Austria was effectively control... 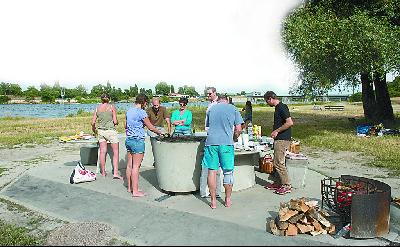 Barbecue in the common area.

[Global Times Special Correspondent Ru Yue] The third wave of the epidemic in Austria was effectively controlled, and the blockade was lifted from May 19th. Several "public barbecue areas" in the capital Vienna have reopened, and the "barbecue season" that citizens have been waiting for has kicked off. According to a questionnaire survey, more than 30% of Austrians have a barbecue every month, and about 15% even barbecue every week. Usually, from the beginning of April to the beginning of October each year is the official Austrian "barbecue season".

Have someone to coordinate the barbecue

Barbecuing is a "big event" personally grasped by the Vienna City Government. There are 8 free public barbecue areas in Vienna’s urban areas, which are open to all citizens throughout the day during the "barbecue season", and no appointment is required. Not only are there convenient parking and toilets, but also tables, chairs and direct drinking water. When barbecues in the free area, citizens need to bring their own barbecue grills, charcoal, and various tools and utensils. In terms of barbecue ingredients, the Austrians’ favorite meats are sausages, ribs and chicken, as well as vegetarian potatoes, zucchini, eggplant, cheese and so on. In addition, men prefer steaks and hamburger steaks, while vegetables are popular with women. Young people are willing to try new barbecue ingredients such as tofu, pulled pork, chocolate bananas, and vegetarian sausages. After experiencing the epidemic, Austrians have paid more attention to the origin and seasonality of food ingredients. Many people will deliberately choose local meat, fish, and seasonal fruits and vegetables.

Vienna is an international and diversified city. The "integration" of immigrants has always been an important issue related to the development of the city. Even the barbecue is no exception. Immigrant groups represented by Turkish descent are keen on barbecue activities, but when they use public barbecue areas, they sometimes have friction with passing pedestrians or nearby residents due to language communication problems. In order to avoid unnecessary misunderstandings and conflicts, various departments of the City of Vienna jointly launched the "Mother Language Barbecue Master" project. Participants need to master German and the language of immigrant groups at the same time, be responsible for communicating the regulations of the public barbecue area, and understand users Actual needs, evaluation and mediation work when disputes arise. 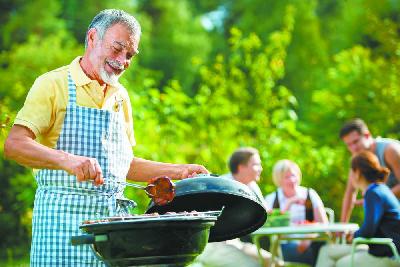 There are many considerations for outdoor barbecues

When I was working in Austria, I would have a picnic with my friends in the public barbecue area on the most popular Danube Island in Vienna every summer. Danube Island is an artificial island full of restaurants and bars. It can carry out sports such as cycling, swimming, roller skating, rowing, etc. It is a popular place for leisure and entertainment by Vienna citizens. The free barbecue location here is very popular, so every time someone needs to go early to occupy the place. If you want to be more relaxed, the other 15 paid barbecue locations on the Danube Island are also a good choice. They can be booked in advance through the municipal department's website and mailbox. The rent is 10 euros, and an additional barbecue station and firewood are provided.

The use of public barbecue areas in Vienna must strictly abide by the relevant regulations of the municipal government. For example, you can only use charcoal, coal or your own dry firewood as fuel. Gas is strictly prohibited, and wood is not allowed to be burned directly in the forest to avoid excessive production. There is a lot of smoke; barbecue grills must be used, and it is forbidden to light a fire directly on the ground; keep the barbecue area clean, take the garbage away or throw it into the trash can; the ashes after burning should be confirmed to be extinguished and poured into a concrete container to prevent re-ignition Causes a fire; it is not allowed to barbecue the whole animal, etc. Although the current epidemic situation has improved, the risk of infection still exists. Therefore, citizens must abide by the basic epidemic prevention regulations when carrying out self-service barbecue activities outdoors. For example, a maximum of 10 adults and 10 children are allowed to gather at the table or barbecue area, and it is necessary to ensure that the distance between people in different families is more than two meters.

In addition, the City of Vienna may also issue a temporary "barbecue ban" based on weather conditions. According to the experience of previous years, trees and grassland will become dry and flammable on days of continuous high temperature and dryness in summer. At this time, in order to prevent fires, public places such as Danube Island, urban parks, forests and surrounding areas are usually prohibited Barbecuing, smoking and using open flames. Citizens can barbecue in private gardens, balconies or terraces in non-"prohibited areas", but fire prevention measures must be taken. The barbecue site should be kept at least a certain distance from the vegetation, while avoiding smoke, odor and noise from affecting neighbors. Relevant departments of the municipal government will conduct inspections at any time, and the time for the cancellation of the barbecue ban depends on when the precipitation reaches the safety standard.

As a cooperative media of the cultural festival, "Vienna Today" also opened a large self-service barbecue area with more than 50 barbecue positions, each of which can be used by 8 people. Visitors who want to try it out by themselves can reserve a place in advance and get 3 hours of use time. They only need to bring their own ingredients. The organizer and sponsors not only provide free charcoal fire and various tools and utensils for barbecue, but also The gift packs that include sauces, side dishes, bread, ice cream and other food will definitely make barbecue fans reap the rewards and return home with great fun.