[Global Network Comprehensive Report] A few days ago, the official website of the Supervision Office of the Shanghai Municipal Health Commission announced the relevant punishment results of Lu Wei, the doctor involved in the "tumor treatment shady". Punishment information shows that the Shanghai Municipal Health Commission made a penalty decision for the "Lu Wei Health Administrative Penalty Case" on May 24, 2021, and imposed a "warning, a fine of 30,000 yuan, and a suspension of practice for 6 months." "Punishment. The reason for the punishment was "failure to fill in medical records as required, and fail to perform the obligation of notification as required in the course of providing medical and health services." 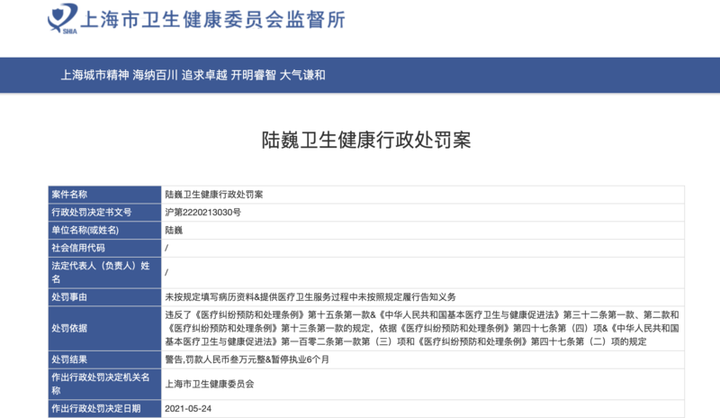 In addition, the official website of the Supervision Office of the Shanghai Municipal Health Commission also announced the punishment results of Xinhua Hospital affiliated to Shanghai Jiaotong University School of Medicine where Lu Wei is located: warning, fined 400,000 yuan. The reason for the punishment was that the medical quality management of the medical institution was not sound.

At the same time, Shanghai Jiakang Bioengineering Co., Ltd., which provided cellular immunotherapy to Qinghai patients in the "tumor treatment shady", was also punished. According to news published on the official website of Shanghai Changning·Health Commission on May 24, Shanghai Jiakang Bioengineering Co., Ltd. was punished with a penalty of confiscation of 150,000 yuan and a fine of RMB 150,000 for “practising without obtaining a medical institution’s practice license”. 1.5 million yuan; total fines and confiscated 1.65 million yuan".

On April 18 this year, during the National Cancer Prevention and Treatment Week, Zhang Yu, a doctor at Peking University Third Hospital, issued a long article, questioning Lu Wei, a general surgeon at Shanghai Xinhua Hospital, who used super-indication drugs and recommended unnecessary recommendations to patients during the treatment. Genetic sequencing and non-compliant cellular immunotherapy. This matter aroused heated public opinion, and also aroused the attention of the National Health Commission.

On April 27th, Jiao Yahui, director of the Medical Administration and Hospital Administration of the National Health Commission, responded to the incident at a regular press conference. After reviewing by experts and peers, he believed that the principles of treatment were basically in line with the entire treatment process. Canonical. Jiao Yahui also stated that the Shanghai Municipal Health Commission has asked the Shanghai Municipal Health Commission to investigate whether there is an improper exchange of benefits on issues including gene sequencing, genetic testing, and NK cell therapy.

On May 28, the Shanghai Municipal Health Commission stated that it had made an administrative punishment decision against Lu Wei. The reasons for the punishment were failure to inform patients of the condition, medical measures, medical risks, alternative medical plans, etc., as well as failing to fill in, Keep the medical records, or fail to make up the emergency medical records in accordance with the regulations.

Regarding the results of the incident, Dr. Zhang Yu issued a document at noon on May 28, stating that he felt "mixed and difficult to evaluate" about the above-mentioned administrative penalty decision. He wrote that my wish is simple: I hope that people can receive standardized medical care and that there are fewer and fewer bad medical practices. And many of my colleagues, those doctors who steadily work hard for the health of the patients, can get a reward.