On June 22, a minor was vaccinated against the new crown in a health care service station in Modine, a city in central Israel.  Israeli Prim... 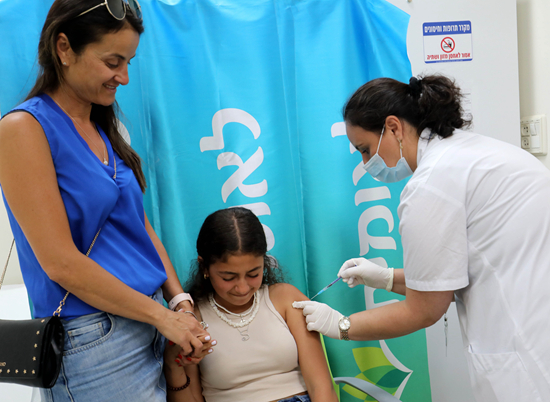 On June 22, a minor was vaccinated against the new crown in a health care service station in Modine, a city in central Israel. Israeli Prime Minister Bennett issued a statement that day that the number of confirmed cases of the new crown in the country has increased significantly recently, and the new crown pneumonia epidemic has re-erupted in the country. Jill Cohen Magen/photo (published by Xinhua News Agency)

At present, there are 4 mutant viruses marked by the WHO as “needs attention”, that is, the highest degree of concern. They are “Alpha” (the first variant of the B.1.1.7 new crown virus reported in the UK) and “Beta” ( Beta, the first reported B.1.351 new coronavirus variant in South Africa), "Gamma" (the first P.1 new coronavirus variant reported in Brazil) and "Delta" (the first B. .1.617.2 New Coronavirus Variant). Among them, in view of the characteristics of "Delta" with strong transmission power, short incubation period, high viral load, rapid development of the disease, and possible immune escape phenomenon, it has recently received more attention.

Maria van Kokhov, technical director of WHO's health emergency project, notified on June 21 that "Delta" has now spread to 92 countries around the world. Earlier, WHO Chief Scientist Sumia Swaminatan also said that due to the significantly enhanced transmission capacity of the "Delta" mutant, this mutated new coronavirus is becoming a major global epidemic of new coronavirus mutants.

"Delta" was first discovered in Maharashtra, India in October 2020, and it was one of the reasons that triggered the rapid development of the second wave of the epidemic in India. Wendy Barkley, professor of virology at Imperial College London, explained that the spike protein of the "delta" variant (a protein that is mainly responsible for promoting infection) has some key mutations, which are conducive to the entry of the virus into the human host cell. It has stronger drug resistance and transmission ability.

According to data from the US Centers for Disease Control and Prevention a few days ago, the number of cases infected with the "Delta" variant accounted for 10% of the total number of newly confirmed cases in the United States. The British government website reported that the number of people infected with the "Delta" variant strain now accounts for more than 90% of new cases in the UK. In the Lisbon area of ​​Portugal, more than half of the newly confirmed cases were caused by "Delta". "Delta" was found in 89.3% of patients with new coronary pneumonia in Moscow, the Russian capital. Indonesian health officials found that "Delta" has taken a leading role in the spread of the epidemic in places such as Jakarta. The recent local epidemics in Guangzhou, Shenzhen, Dongguan and other places in China have also been determined to be caused by "delta" imports.

Related to "Delta", the epidemic in Britain, Russia and other countries has rebounded rapidly recently. The British side said that the country's third wave of epidemic peaks has arrived, and the "unblocking" plan that was originally scheduled to be implemented on June 14 has been postponed. When German Chancellor Merkel met French President Macron in Berlin on June 18, he stated that given the rapid spread of the "Delta" strain, the end of the epidemic should not be declared prematurely.

It should be noted that the mutant virus itself is still undergoing mutations. "The Times of India" quoted Surgit Singh, director of the National Center for Disease Control of India, on June 21, saying that in Tamil Nadu, Maharashtra, Punjab, Madhya Pradesh and other places in India, a total of 15 to 20 cases of "Delta+" infection were reported. Some Indian medical experts warned that the spread of "Delta+" may be twice as fast as the known virus, and there is even the risk of triggering a third wave of epidemics in India.

At present, it is widely agreed by all parties that the best way to prevent new coronary pneumonia and fight against the mutant virus is to get vaccinated. Maria van Kokhov pointed out on June 21 that the existing vaccines are still effective in preventing severe COVID-19 and reducing deaths.

However, there are many research data showing that "Delta" may weaken the protective effect of the new crown vaccine. The British Broadcasting Corporation (BBC) quoted statistics collected by Public Health Scotland and published on The Lancet on June 16th. The protection rate of Pfizer vaccine against Delta was at least two weeks after the second dose of vaccination. It is 79%, and AstraZeneca vaccine is 60%, both of which are slightly lower than the previously announced data. Bruce Aylward, a senior adviser to the Director-General of the World Health Organization, once pointed out that the effectiveness of vaccines does not mean that everyone who has been vaccinated can be protected, and that some people who become infected after vaccination do not mean that the vaccine has failed. The WHO stated that more data is needed to study the effectiveness of various vaccines against different variant strains.

Maria van Kokhov called on the public to ensure two doses of vaccines, while still taking protective measures. Young people are the main target of this advice. Young people in various countries are becoming the most vulnerable target of "Delta" attacks, because the work of vaccinating young people and children with the new crown vaccine is later than that of adult groups; young people have a higher degree of distrust of the new crown vaccine and participate in social activities. The will is even stronger.

The challenge brought by the "Delta" variant strain is global and comprehensive. The most hit is undoubtedly the countries and regions in Europe and Southeast Asia that are already considering restarting cross-border tourism. Javier Segura del Pozo, an epidemiologist and vice president of the Madrid Public Health Association of Spain, said that for countries with a developed tourism industry, whether the borders need to be closed again is a question that needs to be carefully weighed. The "blockade" will greatly affect national income, and the community transmission risks that may be caused by "delta" have to be considered.

The Tokyo Olympics, which is one month away from the opening, are also affected by the mutant virus. The British Broadcasting Corporation (BBC) reported on June 15 that due to the rapid spread of the "Delta" variant, Japan has included the United Kingdom, India and other 10 countries on the "red list" of international travel. Since athletes participating in the Olympics cannot enjoy the privilege of exemption and isolation, this means that athletes from Britain and other countries need to be isolated in hotel rooms for 6 days after arriving in Japan, which will greatly affect athletes' preparations.

In addition, given that vaccination is still considered an important means to combat mutant viruses, the global spread of "Delta" has further highlighted the dilemma of uneven vaccine distribution. The WHO Regional Director for Africa, Muti, recently stated that the third wave of new crown pneumonia is raging on the African continent. The lives of many Africans are at stake, but the stocks and shipments of the new crown vaccine are about to run out. The vaccination rate for the first dose of vaccine on the African continent remains at about 2%, while the vaccination rate in sub-Saharan Africa is only about 1%.

The British Broadcasting Corporation (BBC) reported that although countries have begun to collect and share information about the "Delta" mutant strain, it is worrying that the spread of the mutant strain in developing countries where the monitoring system is not well-developed It cannot be grasped and reported in time, which may cause the new crown variant strain to affect more extensive areas. This once again shows that "no country can stand alone" on the issue of global vaccine and data cooperation. As stated in an Agence France-Presse commentary, this is not just a matter of "delta" and other mutant strains themselves. It is even more important how countries coordinate to respond to the new crown mutant strains.