--> Which is more accurate than the atomic clock? | AboutMicro News
'https://svgshare.com/s/YY2' >

Since the beginning of human civilization, we have begun to use some observable periodic phenomena for timekeeping. As the sun rises in the east and sets in the west, people learn to put up a wooden stick on the ground and read the time by walking the length of the shadow. This is the original clock, also known as the sundial . Later, people developed a more sophisticated sundial based on the sundial . Later, the advent of water clocks and pendulums made timekeeping less and less dependent on natural daylight.

Nowadays, the oscillation of the atom is the most stable periodic event that scientists can observe, and the atomic clock has become the most accurate timer in the world , and its stability even exceeds the operation of the natural planetary system. Today’s most accurate optical atomic clock can be as accurate as one-tenth of 10¹⁸. In other words, if it has been running since the beginning of the Big Bang, the error will not exceed 1 second.

However, scientists did not stop there. They are working hard to create a clock that is more accurate than atomic clocks . It is called a nuclear clock , and it may even become the most accurate timer ever. According to estimates, its accuracy can reach 10 times that of an atomic clock. Physicists believe that as the accuracy of clocks continues to improve, they can help explore more problems and push their exploration to the edge.

The atomic clock uses the energy transition of electrons to time. According to quantum physics, electrons in atoms can only carry a certain amount of energy at a specific energy level. In order for the electrons in the atom to reach another energy level from one energy level, the atom must be irradiated with a laser of the appropriate frequency. This frequency, which is the rate at which light electromagnetic waves oscillate, can be used as a very accurate timer.

A simplified diagram of the electrons and their energy levels in an atom. | Image source: Yue Yue / Principle

In principle, physicists can use the physical properties of atomic nuclei to create a completely new nuclear clock. Nuclear clocks can clock through transitions between nuclear energy levels, not electronic energy levels . It is worth noting that because the nucleus is much smaller than the electron shell of the atom, it is less sensitive to external disturbances. Atomic nuclei can resist the influence of stray electric or magnetic fields that can interfere with atomic clocks. Therefore, some physicists believe that nuclear clocks are more stable and more accurate .

But the problem is that if you want to use atomic nucleus to time, you need to stimulate the transition between atomic nucleus energy levels. Scientists know that for most atomic nuclei, lasers may be "out of reach", which requires light with higher energy than lasers. Fortunately, in all known nuclei, physicists have found an exception, which is a "weird": in thorium-229 , there is a pair of adjacent energy levels that are close enough in energy, and the laser may cause Jump. 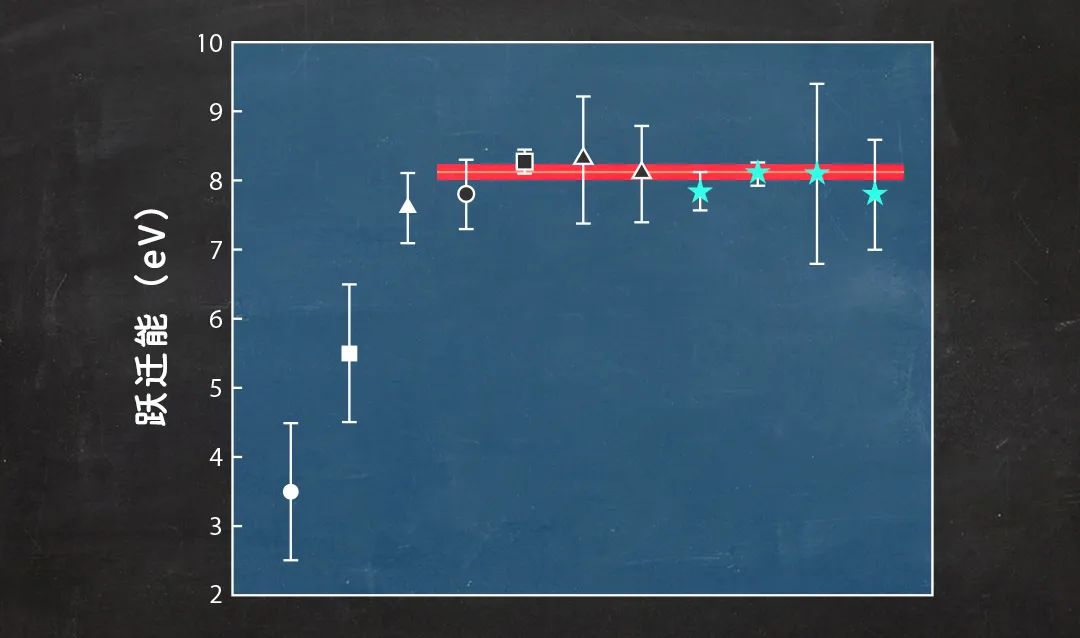 The thorium-229 energy value published since 1994, different shapes of logos represent different studies, and the last four groups (stars) are the new data obtained from the latest research. The thick red line represents the weighted average of the last 8 measurements, which is about 8.12±0.11eV, which is equivalent to a wavelength of 152.7±2.1 nm. | Image source: L. von der Wense/JILA; adapted by APS/Alan Stonebraker

Researchers agree that the energy of this transition is a little more than 8 electron volts, which is equivalent to the wavelength range of ultraviolet rays. In this case, it is possible to excite the transition with laser, but it is also at the limit of current scientists' ability. The edge .

After understanding the magnitude of the transition energy, the next goal of scientists is to trigger it with a laser and build a real nuclear clock in the next few years. Currently, the methods scientists try to include a frequency comb and electronic bridge and so on. The frequency comb is a method of creating a discontinuous frequency array of lasers, which is expected to initiate transitions and measure its energy more accurately; the general principle of the electronic bridge is to make the laser excite electrons first, and then transfer the energy to the nucleus.

Many physicists believe that more accurate clocks can promote improvements in technologies that rely on them, such as GPS navigation . Nuclear clocks can also allow people to perform new tests on basic ideas in physics. What many physicists are interested in is that it can help determine whether some basic constants in nature will change over time.

For example, some studies have shown that the fine structure constant (the number that determines the strength of electromagnetic interaction) may change under certain circumstances, and nuclear clocks are a perfect system for finding changes in fundamental constants. These devices can also test the foundation of Einstein 's general theory of relativity, the so-called principle of equivalence . This extremely accurate clock even has the potential to be used to find dark matter, or to solve some major problems in physics, and help open a new chapter in physics.