Three "ultimate questions" of HarmonyOS, about technology, life and the future | Huangjia Evaluation

Three "ultimate questions" of HarmonyOS, about technology, life and the future | Huangjia Evaluation 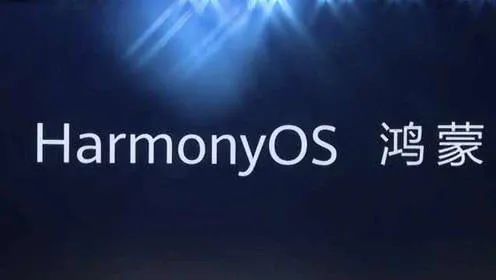 It has been a long time since HarmonyOS was first released. Most of the time, we have only heard of it, but never seen it. So what is the legendary HarmonyOS? What functions can it achieve? Today, the Huangjia Review uses the experience of several devices equipped with HarmonyOS2 to share with you, what exactly is HarmonyOS?

It is hard not to compare it with iOS and Android, but according to the official statement, HarmonyOS is still different from them. To put it simply, HarmonyOS is a unified language for cross-device intelligence, interconnection, and collaboration. Devices as small as KB or as large as GB can be carried, so as to achieve a unified operating network that allows different devices to communicate. The interconnection between the two is more convenient.

In theory, any smart devices we buy, such as sweeping robots, microwave ovens, etc., can be equipped with HarmonyOS. If you use a mobile phone that also carries HarmonyOS to control them, you don't need to download any APP, just touch it. 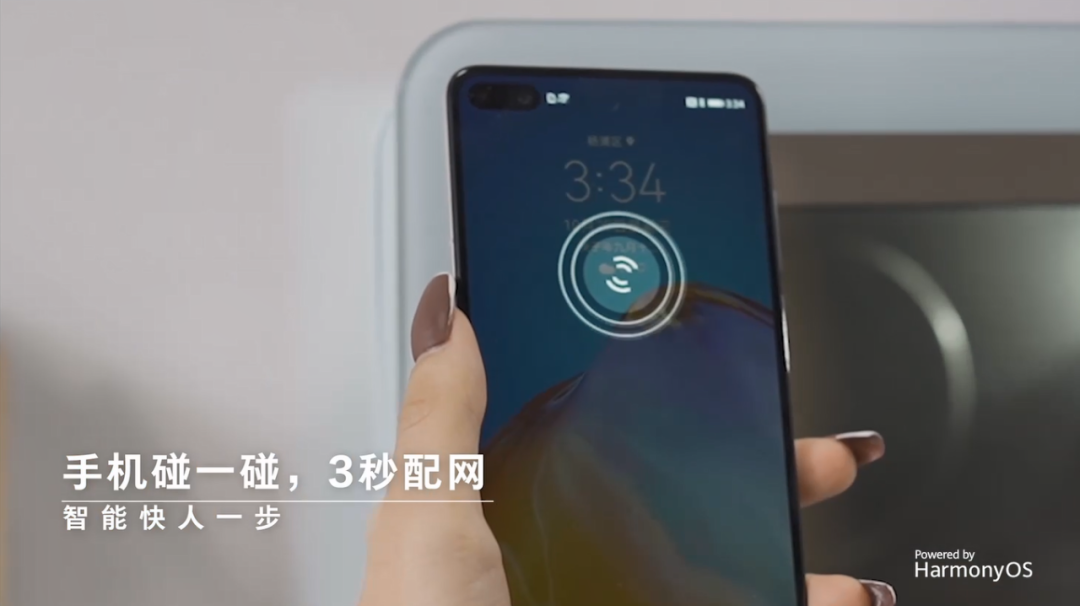 However, the focus of today's experience is not on smart homes, but on the performance of HarmonyOS on personal terminal devices.

That is, watches, mobile phones, tablets, PCs, and big TVs.

Among them, except for Huawei MateBook 16, all other devices are equipped with the latest version of HarmonyOS 2.

Not much to say, let’s enter the experience link below.

This is the first coverage of HarmonyOS on mobile devices, so let's see how it performs on mobile phones, tablets and watches?

What we got was Huawei Mate40 Pro. Of course, the new system must have a new UI design. Some applications on the desktop can be pulled up to open the "universal card", and drag and drop can generate a more detailed card, which can be placed anywhere on the desktop. In addition, we can also choose the card style according to the required size and the displayed information.

The notification center can be called out in the upper left corner of the screen, and the control center is in the upper right corner.

The appearance of the control center has also changed a lot. The first thing you see is the three main modules of music control, WiFi, and Bluetooth. There is also a drop-down menu below, where you can find other common functions such as flashlight hotspot, mobile data, screen recording and so on.

The music control module can switch the APP to be played, or switch the playback device. The music on the mobile phone can be converted to the speaker or smart screen with one key, no extra steps are required.

Below is the HyperTerminal. Other smart devices connected to the Internet in our house can be manipulated by clicking on the device icon.

The HyperTerminal is the highlight of today, so let’s click here first. Let's take a look at the new content on the tablet.

The tablet is Huawei MatePad Pro 12.6 inches. The UI elements are similar to those of the mobile phone. The difference is that the dock bar at the bottom of the screen is divided into two parts, and the three recently used apps are displayed on the right side, so our commonly used apps are easy to use. Can find it. 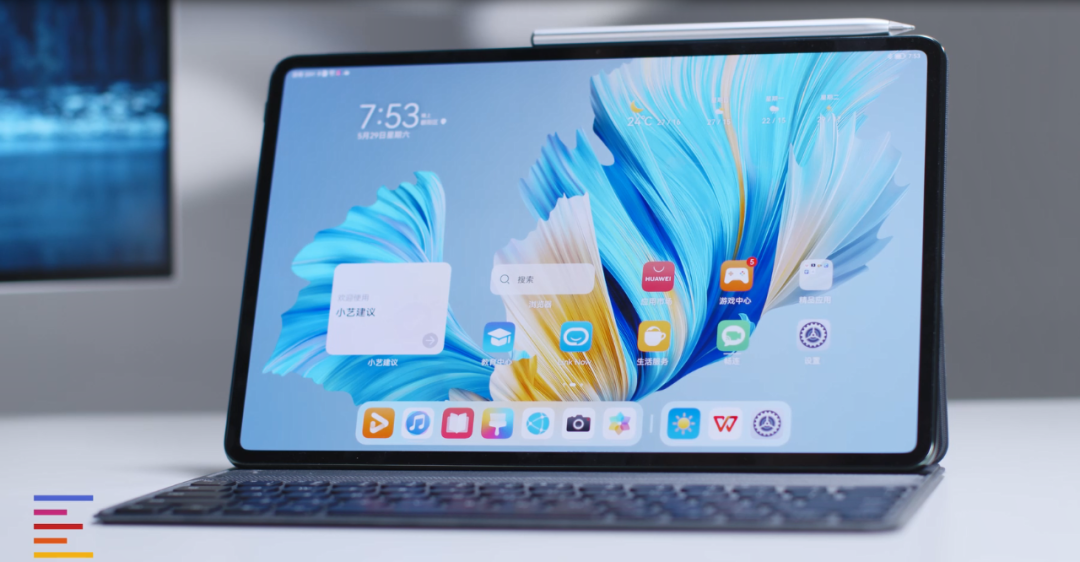 The watch we got was Huawei Watch 3 Pro. Compared with the previous generation, this representative plate is larger in size and has more weight. The UI design has also changed a lot. The main menu page has changed from the previous list form to the grid shape. Rotate the crown to adjust the interface size to see all applications. Drag the screen to change the display range, which is convenient for clicking. The experience is much smoother than the previous generation. 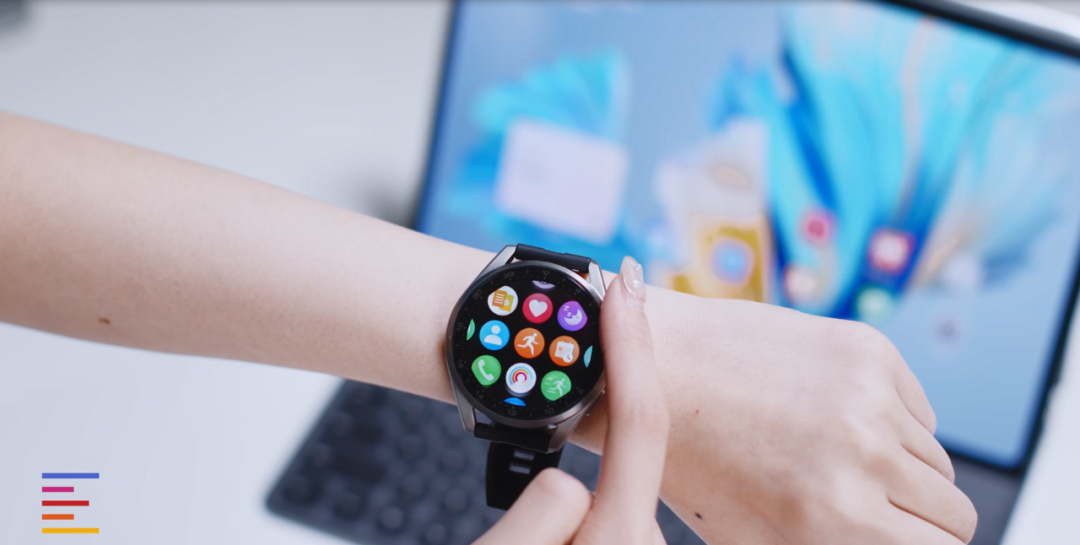 HyperTerminal can be said to be the nirvana of HarmonyOS 2 this time, and many new experiences will start from here.

In fact, tablets and mobile phones are relatively portable devices. The interconnection between them greatly facilitates the sharing of resources with each other. While making up for the shortcomings of the small screen of the mobile phone, it also improves the work efficiency of the tablet. .

In addition to the multi-screen collaboration that has been achieved before, the collaboration between the mobile phone and the PC after upgrading HarmonyOS 2 needs to rely on the Huawei Computer Manager APP on the PC side. This time, we got the MateBook 16 that was just released. The first connection requires the phone to open the NFC and touch the HUAWEI Share on the PC. After that, the PC icon will appear in the super terminal, and you can drag it directly next time. Move the icon to connect. 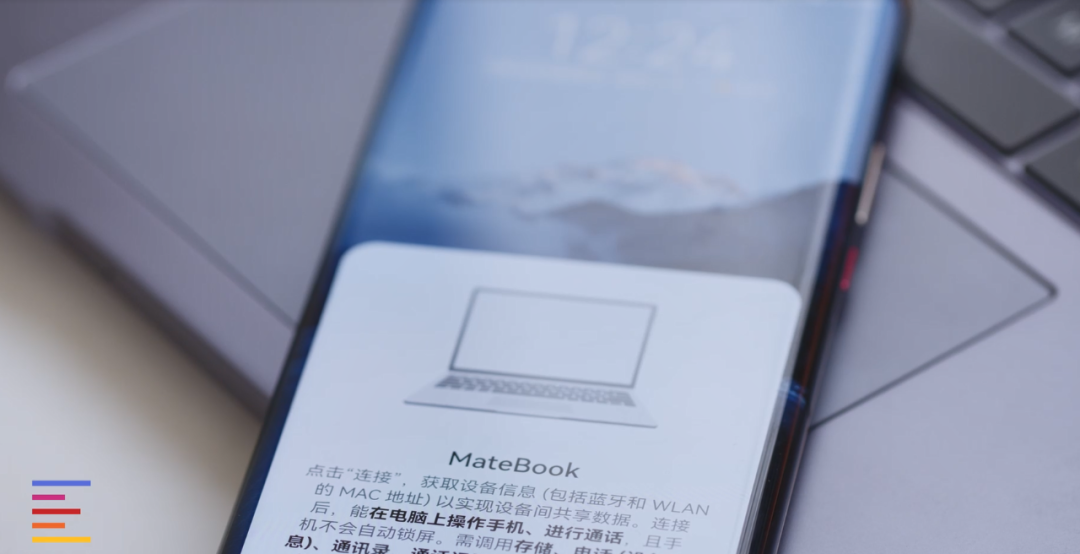 After a successful connection, the mobile phone becomes a drive letter of the PC, which is equivalent to an external hard disk. The use logic is the same as the internal hard disk of the PC. The documents, photos, and videos in the mobile phone can be directly opened and edited through the PC, and the file transfer is also It can be done by copying and pasting, or you can right-click the file you want to transfer and click "Send to Phone". 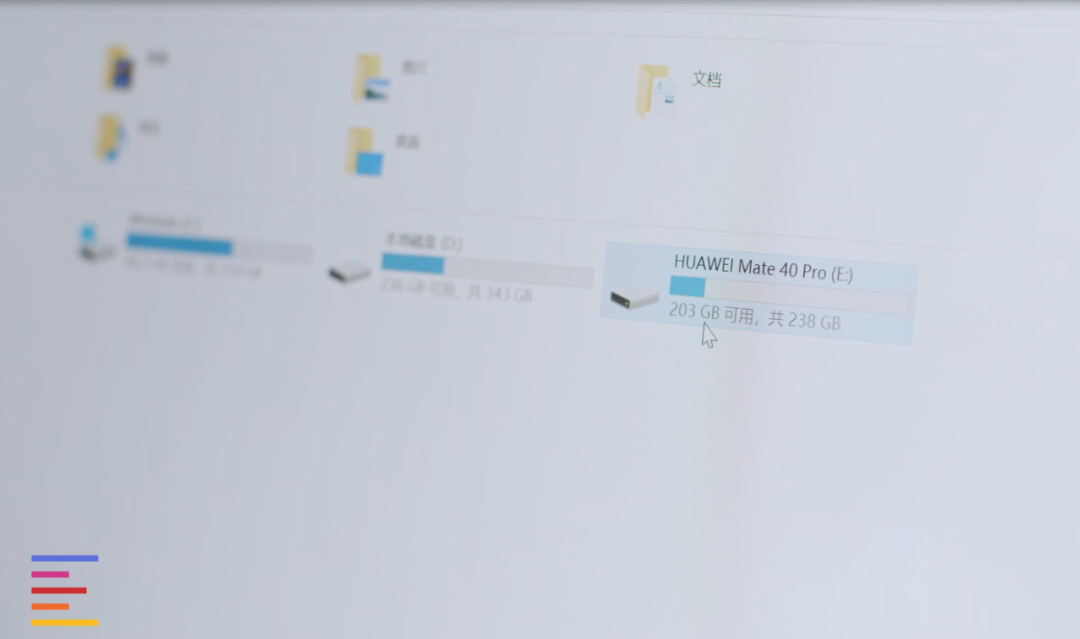 After connecting the smart screen, the smart screen will open the desktop mode by default, and use the touchpad on the phone to simulate the operation logic of the mouse to click. The APP will also be displayed in a large-screen mode, which is very suitable for presentations or PPT during a meeting. Of course, if you want to use a large 75-inch screen to code words, there is no problem. The touchpad of your mobile phone supports keyboard input, or you can connect a Bluetooth keyboard through your mobile phone.

In addition, in the smart life APP on the mobile phone, we can control the smart screen switch, search for movies, or open any application on the smart screen. In short, the TV's own remote control can be put to dust after the first power on. 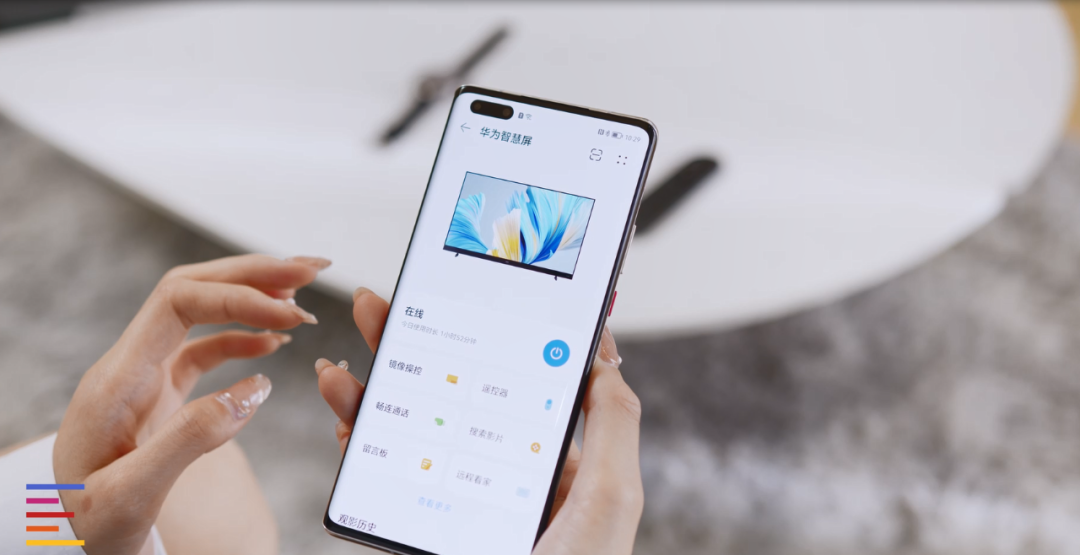 In terms of smart screen collaboration, the new system still continues the concept of distributed screen projection, such as split-screen projection. The large screen can display half of the mobile phone screen and half of the TV screen. The specific projection posture can refer to the previous evaluation of Huawei Smart Screen V65, which has been introduced in detail. 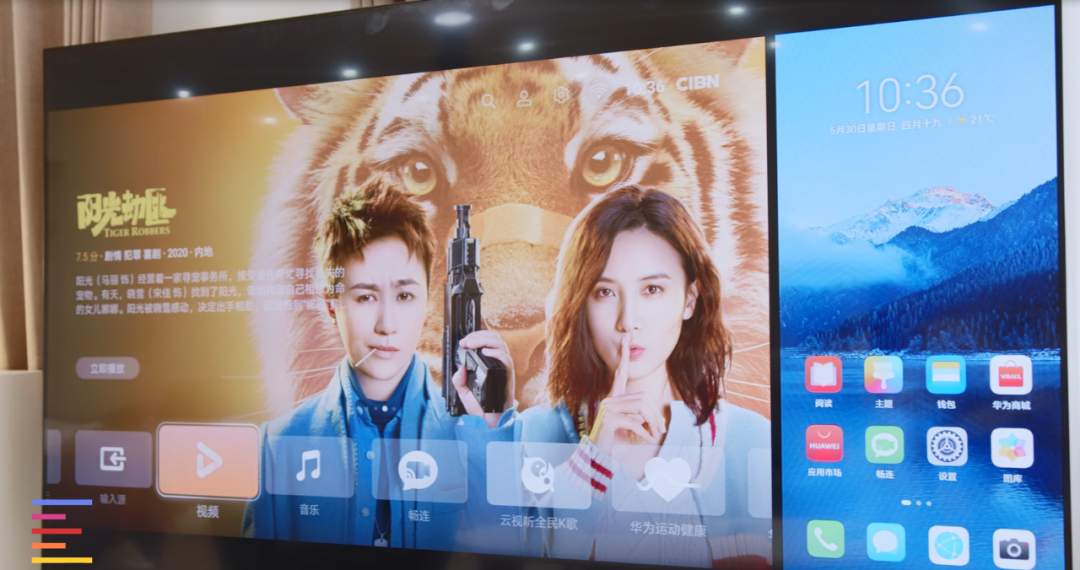 In addition to mobile phones and other devices, this time the tablet and PC can also achieve multi-screen collaboration, and support three collaboration modes: mirroring, expansion and sharing. 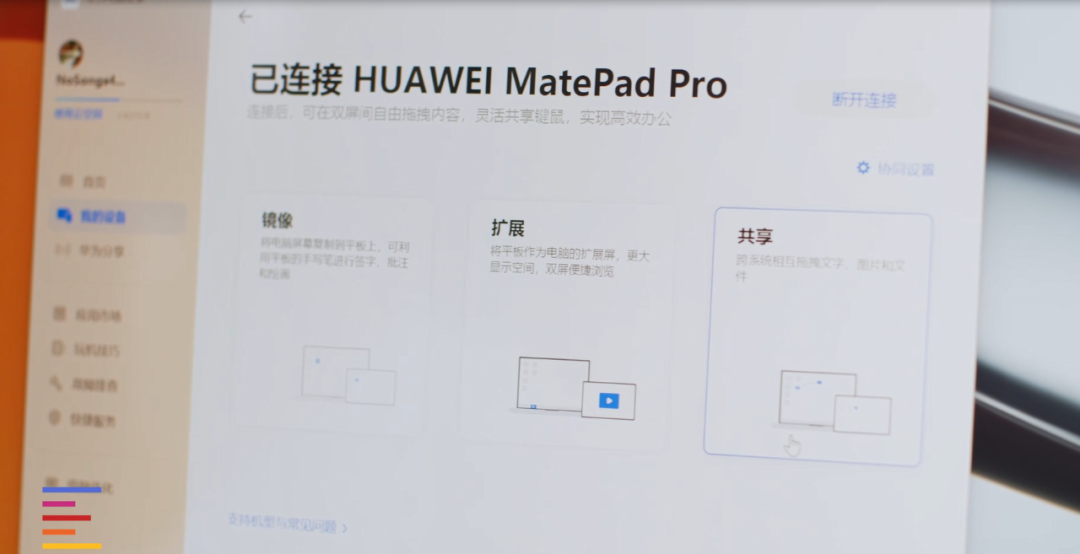 In the extended mode, it is equivalent to a PC with an extra screen, and the two screens have their own uses. The second screen can check data, and the main screen can write scripts, or one screen can be used for online lessons and the other is used to take notes.

In the mirror mode, the two screens display the same content, but if you use the stylus to write and draw on the tablet, you can also synchronize to the PC in real time. The tablet is equivalent to the existence of a digital screen on the PC, regardless of whether it is a revised manuscript. It is very convenient to do some artistic creation.

In sharing mode, both devices display their original desktops, but the PC's touchpad or mouse can directly operate the tablet, and the two devices can drag pictures or files to each other and save them. The logic is connected to the mobile phone mentioned above. PC drag and drop is similar, the material can be dragged into the document being edited.

In addition, the PC and the tablet can also sense the mutual position. When your tablet is placed on the right side of the PC, we can drag the window or file to the right. Correspondingly, if the position is reversed, you can drag it to the left.

Tap the camera icon on the watch side not only to wake up the phone camera, but also to monitor in real time on the watch. The three shooting modes are 2 seconds countdown photo, instant photo and 30 seconds video recording. The photos you just took can be viewed on the watch side. If you are not satisfied, you can take photos.

When shooting with a rear lens, you can also rotate the crown to adjust the focal length. Turning it outwards is the magnification, and turning it in to the end is the wide-angle. With this function, when meeting with friends and the company team building wants to take a group photo, there is no need to think about who is the photographer and who will not be in the mirror.

Since its release, HarmonyOS has attracted a lot of attention. Today, Huawei has finally revealed HarmonyOS2 to consumers. The distributed multi-screen concept that was implemented on smart screens has also been well reflected on other devices.

In HarmonyOS, all devices form a network of devices connected to each other. Mobile phones, tablets, and PCs are no longer isolated individuals, but a molecule in this device network. While they have the ability to work independently, Through HarmonyOS, it has made up for the shortcomings in certain scenarios, and at the same time has changed our working mode from a certain angle. 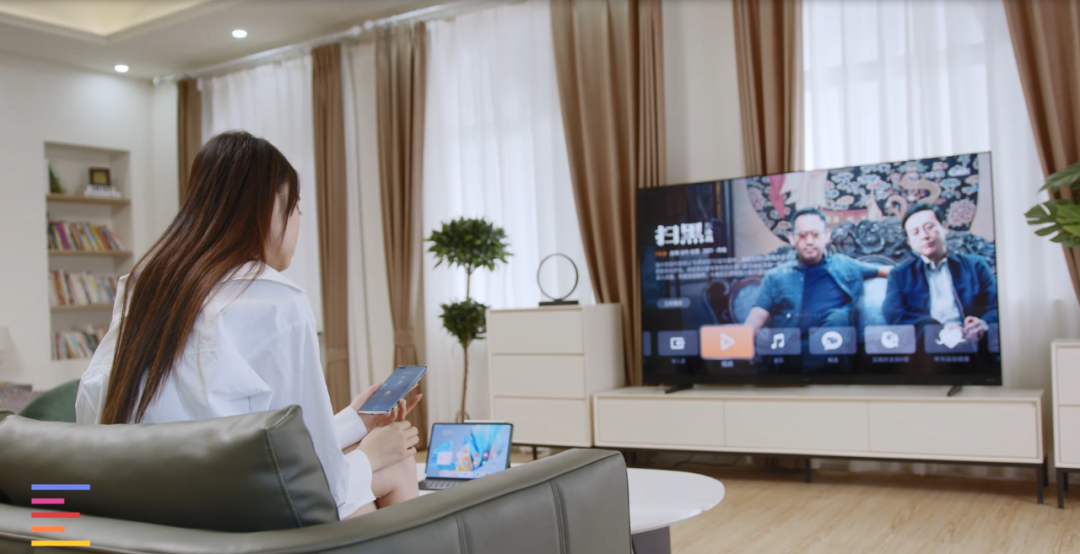 Finally, it is worth mentioning that OpenHarmony will be completely open source to third-party manufacturers. In the future, we will not only see Huawei phones equipped with HarmonyOS, but may also have the opportunity to use other brand models equipped with HarmonyOS. According to HarmonyOS's "all things into one" attribute, naturally the more connected devices, the more comprehensive the functions will be. Therefore, open source is a very wise choice and paves the way for future development. The future can be expected, let us wait and see.