Foreign media: Another historic progress in the development of China's aerospace industry

On May 22, the Chinese Mars Rover Zhurong left the landing platform safely, reached the surface of Mars, and began to patrol and explore. ...

On May 22, the Chinese Mars Rover Zhurong left the landing platform safely, reached the surface of Mars, and began to patrol and explore. In the past few days, foreign media have paid close attention to the progress of China’s first Mars exploration mission, and positively commented that China has achieved a leap from the Earth-Moon system to the interplanetary system. They believe that this feat is a manifestation of the rapid development of China’s aerospace industry and has created new opportunities for mankind to explore the universe. Opportunity.

"A greater and rarer achievement than the moon landing challenge"

Mars exploration is highly risky and difficult. The exploration mission faces challenges such as the special interplanetary space environment, the thin Martian atmosphere, and the complex topography and topography of the Martian surface. At the same time, it is affected by long distances and long time delays, and there are uncertain environments and complex landing procedures during the landing phase. , The ground cannot intervene and other difficulties.

The website of the British "Nature" magazine quoted Italian planetary scientist Roberto Orosse as saying that the implementation of this Mars exploration mission is "a huge leap for China" because China has completed other spaceflights in one mission. A task that the great powers took decades to achieve before.

German mainstream media reports paid particular attention to the difficulty and complexity of the Mars landing. The German "Daily News" website stated that China's Tianwen-1 probe successfully landed on Mars and that the Zhurong rover successfully sailed on the surface of Mars, which attracted the attention of the world. From a technical point of view, activities such as flying to and landing on Mars are "extremely difficult."

The German "Frankfurt Allgemeine Zeitung" website published an article saying that 10 months after the launch of Tianwen-1, the Zhurong rover carried by it traveled on Mars for the first time. This makes China the first country to orbit, land on Mars and deploy a rover on Mars during its first space flight to Mars.

Swiss "24 Hours", "Morning News", "Geneva Tribune" and many other media reported in reports that the Chinese Mars Rover Zhurong began to patrol and explore the red planet a week after arriving on Mars.

The Associated Press reported that the successful landing of the Tianwen-1 probe on Mars is "a greater and rarer achievement than the moon landing challenge" and "another historic development in the development of China's aerospace industry."

"China's great success in the field of aerospace research"

Mars is the planet with the longest exploration time and the largest number of times by humans, and the largest number of countries participating in the exploration. However, the success rate of Mars exploration missions has not been high. Of the 47 Mars exploration missions currently implemented, only 25 were successful or partially successful. Mars landing missions are more risky, with 22 landing missions (19 landings on Mars and 3 landings on Mars satellites), only 10 were successful. At present, only the United States and China have mastered the Mars soft landing technology.

Reuters published a report titled "China Completes the Landing of a Historic Mars Rover", saying that China is carrying out an ambitious space exploration program, becoming the first in the world to achieve "orbiting and landing" on its first mission to Mars. And patrol the country with the three major goals. Next, China will focus on promoting the research and development of reusable spacecraft, and plans to build an international lunar research station.

South Korea's "Han Minzu Daily" pointed out in a report that for landing on Mars, where the atmospheric density is less than 1% of the earth, every procedure of the probe must be precisely controlled. China has achieved this, becoming the second country in the world to successfully land on Mars.

According to the Russian Satellite Network, Rogozin, general manager of the Russian National Aerospace Corporation, recently used social media to congratulate the Tianwen-1 probe on the successful landing of Mars, and said that "this is a huge success China has achieved in the field of aerospace research." He emphasized that Russia supports the strengthening of international cooperation and joint advancement of space exploration. Lisov, a well-known Russian aerospace news commentator, believes that this is China's once again proving its leading position in the field of space exploration after completing its lunar landing program.

According to a report on the "Russia Today" website, the successful landing of Tianwen-1 on Mars is a remarkable achievement in China's aerospace development, proving that China has become one of the leading countries in space exploration. Since China sent astronauts into space for the first time in 2003, China's space research has made rapid progress.

"Russian Business Consulting Daily" website quoted Russian astronaut and rocket expert Alexander Zheleznyakov as saying that in the field of aerospace, China has made more and more achievements, and we admire China in the process of implementing its space program. Maintain continuity and purpose.

South Korea’s "Mainichi Business News" reported that with the full support of the country, China has achieved a full rise in the field of space exploration.

CNN reported that the historic landing of the Zhurong Mars rover, named after the god of fire in Chinese myths and legends, demonstrated China’s tremendous progress in space exploration and China’s increasingly powerful space exploration capabilities.

"Humanity's research on Mars has entered a new stage"

A report on the "Deutsche Welle" website pointed out: "For the first time China's mark was left on Mars." The article said that the Zhurong rover will carry out an exploration mission on Mars for at least three months, and it is expected that it can inspect the local permafrost. Layer, which returns previously unknown geological information.

The Spanish newspaper El Nacional commented that China's rapid rise in space technology has achieved new success in space exploration. "2021 can be said to be a crucial year in the process of mankind's exploration of space, and mankind's research on Mars has entered a new stage."

The Colombian "Repubblica" website reported that planetary geologist Emily Laquedavola was quoted as saying that “Mars is the most difficult place to land in the solar system.” Tianwen-1’s landing on Mars signifies that China is already in the aerospace industry. Major progress will be made to make new and greater contributions to the global exploration of the mysteries of the universe.

Mexico’s "Cosmic" reported and commented on the topic "Why China's Tianwen-1 landing on Mars is a historic achievement". This is an important step in China's interstellar exploration journey. In its first mission to Mars, China has achieved the three goals of "orbiting, landing, and patrolling." "This is a world-class milestone."

The US "National Geographic" magazine emphasized in the report that a successful landing on the surface of Mars is an extraordinary challenge. It is necessary to stimulate young people’s scientific enthusiasm, enhance the creativity of the entire country, enhance the ability to explore the unknown, and explore the expansion of human survival. The possibility of space is of great significance. The report quoted the comment of Michel Blanc, a researcher at the French Institute of Astrophysics and Planetary Science, saying that “landing on Mars is much more difficult than landing on the moon, but China has passed a series of successful space missions and is ready for this moment.” .

An article from the French European Times Network noted that the Tianwen-1 probe carried 13 scientific payloads to help research on the Martian space environment, surface morphology, and soil surface structure. The article commented that every link of the Mars exploration mission must be accurate and correct. It is a concentrated display of the scientific research level in many fields, including aerospace. 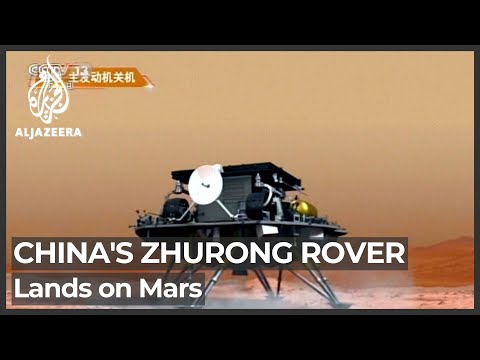