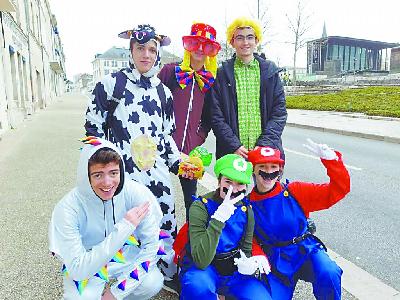 The "French college entrance examination" or "high school graduation examination" does not depend on a third grade exam. The proportion of the second and third grades is increased to 40%, 30% of which are the average and final exam results of the two grades, and 10% is the school The performance appraisal comment given on the transcript is also "normal class performance". For French high school students, the "college entrance examination" has actually started from the first semester of the second year of high school, and the most important language is the last semester of the second year of high school. Every "quiz", and even the performance of every class, will have a subtle influence on the final grades, and it is directly related to future studies and job hunting. Because of this, French high school students will work hard to study in the second and third years of high school. But all this will come to an end: 100 days before graduating from high school and obtaining the "Bachelor" diploma, all "performance appraisals" will be declared over. Except for the remaining untested subjects in the examination, the remaining large and small examinations and classroom performance will not be included. Test scores. So there will be a 100-day countdown carnival.

The last day to the "100 days countdown" is the "good day" for the start of the "ceremony". As the day gets darker, the students will go to campus and park camping to "exchange opinions" for the next day's party. Parents are not allowed to see. If students meet each other, they will usually exchange candies. Wednesday is a "regular day". The high school seniors will follow the "inspiration" exchanged the night before, imitate Easter and Halloween, and dress themselves as "wonderful" as possible (pictured), and then take to the streets and parade. Follow the tradition of "predecessors" and ask passers-by for "sponsorship". If you don't give it, you will throw flour or eggs half-jokingly and half-seriously. As the sun sets, they will bring the “sponsorship” they harvested and their change to gather at a pre-appointed night show, and then go on a carnival that usually lasts all night. Traditionally, this "night show" is the "countdown to the hundred-day ceremony". The climax of the climax, and the climax of the climax, is to drink the so-called "hundred glasses of beer", which of course is not a real number, but generally refers to "drinking beer without restraint."

France also has a drinking age limit. Not all senior high school graduates are over drinking age on this day, but usually "adults" will "open the Internet" on this day, pretending not to see-but "adults" Participating in this evening event is a taboo by convention, and usually no one invites them. By the way, the most popular "Countdown to Hundred Days Commemoration" is also called "père cent", which is a combination of "father" and "gang 镚er". The original meaning is "ask my father for change to buy beer at night".

For the vast majority of "good kids", the night carnival on this day is the first time in their lives, and the next morning is naturally dizzy. Therefore, the school usually avoids their morning attendance in a "compassionate" manner. , And try not to arrange too many courses.

The "Countdown Hundred Days Ceremony" has only completed the "first half" and the "second half" will last for almost a full week. During this week, students will try their best to wear suits and sit on the ground in class, and teachers will try their best Treating them with the attitude of "adults to adults", the meaning is to express gratitude and sentiment to the school and teachers, and to express a kind of "we grow up, we have a carnival, but we are actually still good children." "The complex emotions.

Le percent is also used by some "bear kids" to provoke troubles. It is said that in some places, "make-up camping" and "night partying" will be mixed with some "indecent" content, and even become a place where soft drugs are rampant. It is not uncommon to use the pretence of "begging for sponsorship" to provoke troubles, rob passers-by, or use this occasion to seek revenge, fight, and become jealous. It is not uncommon to cause trouble to the community.

Because of this, in big cities such as Paris and Marseille, "Le percent" has become more and more "shrinking". The original spontaneous carnivals of students have begun to be replaced by specially organized "traditional gatherings", including dance parties, group photos, teachers and students. Friendship...Instead of "traditional programs" such as egg smashing and flour throwing, some schools even have the principal come forward to discourage students from holding Le percent.

In recent years, due to a series of public security problems caused by such festivals, France has only Bordeaux, Germany, and Brittany in the east. Even in these areas, people often celebrate in schools and rarely go to the streets to lively. In March this year, only a few areas had such activities on a small scale, such as Bayonne. Other areas have been banned by the authorities.

It is said that the Le percent ritual originated from conscripts in the 1930s. They wanted to reach the end of their service period and return home in peace, so they held a grand ceremony and carnival during the "countdown to a hundred days" of retirement, and the core of the ceremony was gluttony. For the "liberation banquet" of overdrinking, some naughty soldiers would make excuses to "prepare the "liberation banquet", half-jokingly and half-seriously "extorting" various "sponsorships" from passers-by and even the officials. All of this was borrowed by later high school graduates for the countdown ceremony of the college entrance examination.