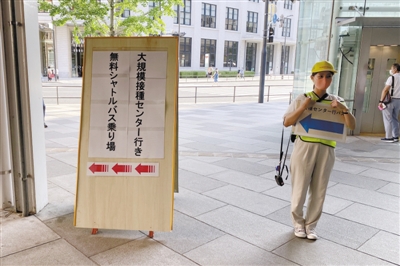 The picture shows at the exit of Tokyo Station, the staff is waiting for the elderly who have completed the appointment to take the bus to the vaccination center.

Photo by Chen Chao, our reporter in Japan

The "DNA vaccine" developed by the Osaka-based bio-risk company Agilent has already undergone a 500-person clinical trial; Shiono Yoshitaka Pharmaceutical Co., Ltd., also located in Osaka, announced in May that its "recombinant protein vaccine" is in large-scale clinical trials. If conditions such as implementation methods and approval methods are available, vaccines can be provided within the year; Daiichi Sankyo announced in March this year that the "mRNA" vaccine developed by it has begun clinical trials for 152 people; KM located in Kumamoto City Biologics also announced in March this year that its "inactivated vaccine" has started clinical trials with 210 subjects. According to the current approval method, the permit will be obtained in 2023 at the earliest.